Dubai Police is hosting the UAE Swat Challenge in February 2020. Dubai Police's Jorge J. Roman and Dr Hamdan Al Samt explain how the event is more than a competition with specialist teams from all over world coming together to compete, but also to share experiences and exchange ideas.

Special Weapons and Tactics (SWAT) teams are specialised groups trained in tactical operations and the use of force (Snow, 1996). The most typical implementation of a SWAT team (often referred to as Specialist Firearms Teams (SFO/CTSFO) in the UK) is as a part-time activity for police officers within a law enforcement agency, such as a local police department. In these departments, police officers have primary responsibilities in areas such as detective work, vice, or street patrols, and their participation in the SWAT team activities is a part-time volunteer assignment. SWAT teams extend the training of police officers in two important ways. In traditional police work, the emphasis is on acting alone, with officers using a minimum level of force to defuse situations (Snow, 1996).

The SWAT teams around the world are comprised of agency members and have one of the most intense training programmes. They are a dedicated team of selected personnel prepared for successfully resolving critical incidents that exceed the capabilities of law enforcement first responders.

SWAT team members are trained to use advanced tactics and specialised weapons and other equipment to allow them to handle difficult and dynamic situations effectively including hostage rescue, armed barricaded subjects, high-risk search warrants and violent fugitive apprehensions.

The SWAT World Challenge is an annual competition of law enforcement SWAT teams. It is usually held close to Little Rock, Arkansas, USA, and its goals are to encourage the exchange of ideas and techniques and promote the high level tactical skills, mental focus and physical endurance needed by SWAT teams.

The event began in 2004 under its original name of World SWAT Challenge and was won by San Antonio, Texas. In 2005, Germany’s GSG 9 won all eight events and in 2006 won four of the eight events maintaining its top SWAT World Challenge ranking.

The event was renamed Original SWAT World Challenge in 2005 when the tactical footwear company Original SWAT became the sponsor, and has since been expanded into the World SWAT Series which include regional competitions capable of hosting 25-30 competing teams. 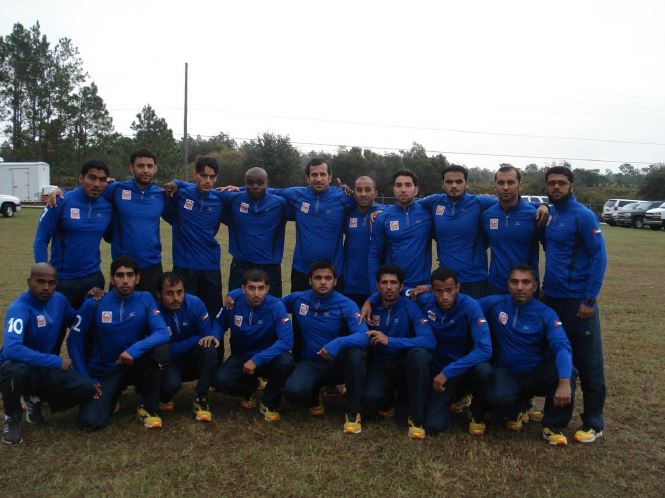 In its 35th year, the 2017 SWAT Round-Up International is not just a competition — it’s an educational experience, Orlando Police Detective Raul Rivas said.

More than 50 SWAT teams from around the world — including Dubai, Hungary and Sweden — descended on Central Florida to show off their skills in an international special-operations competition and training event. It is one of the oldest competitions that includes a shooting range, educational programmes, special equipment exhibition and security protocols.

Dubai Police hosted the first UAE SWAT Challenge under the patronage of His Highness Lt General Sheikh Saif Bin Zayed Al Nahyan, Deputy Prime Minister and Minister of Interior, United Arab Emirates and under the directive of His Excellency Major-General Abdullah Khalifa Al Marri, Commander-in-Chief of Dubai Police. The UAE SWAT Challenge was highly unique for the world and an exciting initiative for the stakeholders.

It [the competition] offers a very special opportunity for the world to witness and understand the incredible level of skill possessed by these Top Tier policing professionals in the spirit of collaboration, exchange of ideas, mutual positive values, solidarity and respect.

Apart from being the largest gathering of SWAT agencies from around the world in competition with one another, it showed an incredible commitment by Dubai to pursue the highest levels of policing practices. It also offered a very special opportunity for the world to witness and understand the incredible level of skill possessed by these Top Tier policing professionals in the spirit of collaboration, exchange of ideas, mutual positive values, solidarity and respect. The competition was aimed at sharing best practices among the elite SWAT teams.

The Challenge was designed to promote cooperation between all SWAT Teams on a global level and for members to participate in fact-based scenarios to create best practices in a friendly environment, give the teams the opportunity to meet, communicate, learn from one another and familiarise themselves with different team tactics and strategies used globally.

The SWAT community is a very small and exclusive brotherhood and the UAE SWAT Challenge truly brought these brothers together in a highly-contested competition. All teams are sworn law enforcement, military or corrections officers, and a member of the registered agency’s response team.

SWAT Teams around the world select only the best of the best from their departments to become members of their SWAT teams. They are trained in tactics, shooting proficiency, observation methods and decision making under stressful conditions.

The Chief of Police, Sheriff and Team Commander believe their team is prepared to respond to these high-risk events, but one very important way to test their team is to allow them to participate in SWAT competitions and challenges against other national and international SWAT teams which test the strength, stamina, skills, tactics, tactical planning, tactical leadership, shooting proficiency, observations skills, decision making and teamwork of each competing team.

Over the five days, these SWAT teams put on a remarkable display of skill, spirit, enthusiasm, teamwork and intensity…While the activities will be staged in Dubai, they represent challenges the teams regularly face in the line of duty.

Over five days, these SWAT teams put on a remarkable display of skill, spirit, enthusiasm, teamwork and intensity. Highly-trained officers took part in a variety of dramatic scenarios – tactical event, assault event, officer rescue, tower event and an obstacle course. While the activities are staged in Dubai, they represent challenges the teams regularly face in the line of duty.

The Emirate’s own SWAT officers also took part in the competition and put in a strong performance on the opening day of action. The response from the participants, the media, the law enforcement community and most of all, the public, was outstanding. 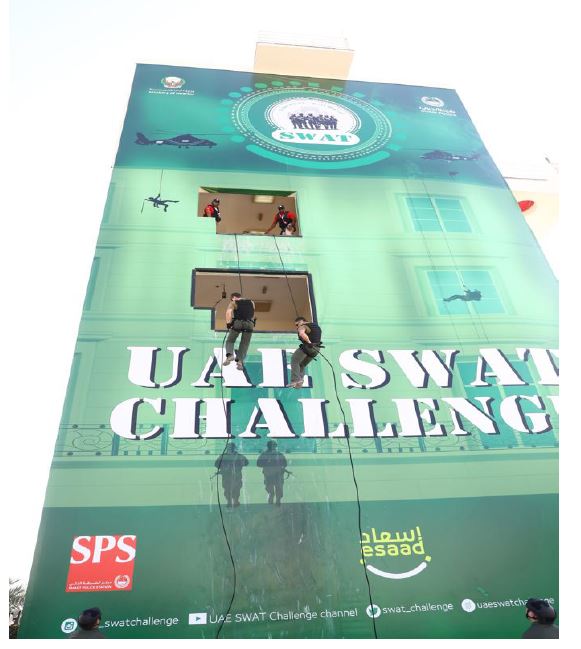 Data from the UAE Swat Challenge

Designed by SWAT professionals, for the first time in the world, we watched International teams go head to head in five Challenge Categories that tested these global tactical and weapons professionals to the maximum.

“Competing team” refers to all team members who are registered and eligible to compete in the team events during the week. Five competitors are required for all mandatory team events although up to eight team members may register. Those eight personnel may alternate on any given team event.

The UAE SWAT Challenge is a unique event because it provides basic weapons (handguns, sub-machine guns, rifles, etc.) and ammunition for use by all the teams (international and domestic) during team events, as well as matching operational gear. This assistance provided by the UAE SWAT Challenge eliminates the necessity for international teams to coordinate with their country or the UAE to ship their own weapons, ammunition or any other specialised gear.

Weapon Systems provided by the UAE SWAT Challenge for team competitions include:

Dubai Police won the 1st spot at the UAE Swat Challenge with a total 219 points, 2nd place went to the State Security Committee Police from Belarus with 208 points and Osceola County Police, USA, came 3rd place with 202 points. However, more important than the challenge results was the training and networking opportunities the Dubai Police SWAT Challenge was able to provide for those who attended.

An invitation to the II International UAE SWAT Challenge February 9 – 13, 2020 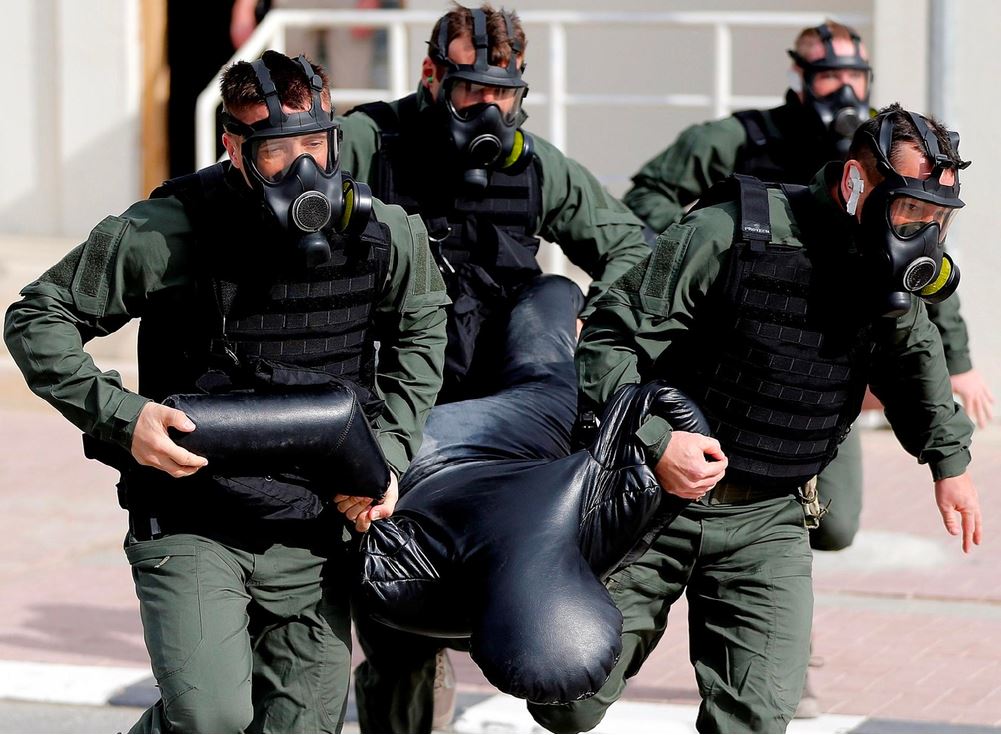 Following the success of the first UAE SWAT Challenge, the Dubai Police General Headquarters would like to invite all police agencies, military forces, SWAT teams, special forces, and special operation forces to participate in the 2020 challenge.

The event seeks to promote an effective future partnership based on collaboration, cooperation, and the exchange of ideas to develop and improve security.

Through the Global UAE SWAT Challenge 2020, Dubai Police hopes to bring together global SWAT teams under one roof to compete, and share experiences and tactical skills as part of a five-part challenge organised by experts to select the best teams.

The challenge will include tactical and arms tests as well as tests that look for high mental capabilities and physical endurance.

Dubai Police is committed to creating a perfect living, training and entertainment experience for all participating entities through this event. It shall provide transportation from and to the airport and the hotel, as well as all necessary arms and ammunition.

The overall winners of this challenge will be received under the honourable patronage of H.H. Sheikh Saif bin Zayed Al Nahyan, Deputy Prime Minister and Minister of Interior of the United Arab Emirates.

Dubai Police General Headquarters is organising the second Global UAE SWAT Challenge to be held in the Emirate of Dubai from 9 to 13 February 2020.

The Overall winner of this challenge will receive:

Winners of each category will receive:

For registration and participation, please visit our website: https://uaeswatchallenge.ae

The UAE SWAT Challenge is highly unique for the world and an exciting initiative for stakeholders. Participating SWAT teams put on a remarkable display of skill, spirit, enthusiasm, teamwork, companionship and intensity.

Apart from being the largest gathering of SWAT agencies from around the world in competition with one another, it shows an incredible commitment by Dubai to pursue the highest levels of the policing practices.

Dubai Police began working on the II UAE Swat Challenge right after the first competition finished. As a result, the II UAE SWAT Challenge will take place in Dubai, UAE from the 9th until the 13th of February 2020.

The results of the events based on internal assessment will help Dubai Police take action to improve and achieve better performances for 2020. The Dubai Police will keep working hard to add value to Dubai ́s citizens. It is the journey, not the destination, that is important in striving for quality in the Dubai Police.

“The UAE Swat Challenge 2020, it´s another opportunity for Dubai Police and our stakeholders to see a great event host it here in Dubai with more than 60 teams from more than 30 countries from all over the world.” (Commander in Chief General Abdullah Khalifa Al Marri)

An overview of the Dubai Police (DP)

Since Dubai Police (DP) was founded in 1956, great attention has been paid to social responsibility. Dubai Police aims to provide quality services to all sections of society to gain their satisfaction and exceed their expectations.

Dubai Police uses a Business Excellence Framework (EFQM, Baldrige and Dubai Government Excellence Program) and formal Benchmarking (TRADE Methodology) to assess its performance in order to offer an outstanding service to its stakeholders.

Dubai Police services are not only limited to maintaining security and stability, but regularly exceed society’s requirements. The Strategic Plan contains objectives that meet the expectations and aspirations of its customers and guarantees their satisfaction, which stems from the strategic plan of the Government of the Emirate of Dubai.

DP use excellent performance standards and have highly-defined descriptions of its tasks, duties and jurisdictions. They have developed institutional performance criteria in the application of strategic planning, simplifying procedures and managing the human and financial resources more proficiently.

DP take pride in its creative initiatives, appreciate personal excellence and work as one team. DP always strives to maintain the highest levels of comfort, security and safe living for its visitors and residents. The fact that 96.8% of people feel it is safe and secure to walk around at night in the UAE has ranked the country as the world’s second safest place. The UAE’s policies and strategies are behind the achievements that make the country one of the safest countries in the world. (Gallup, 2017) 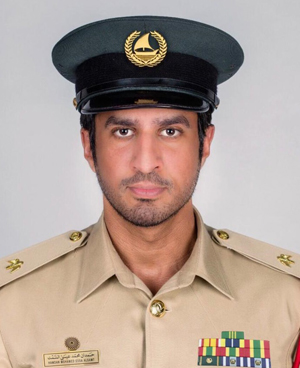