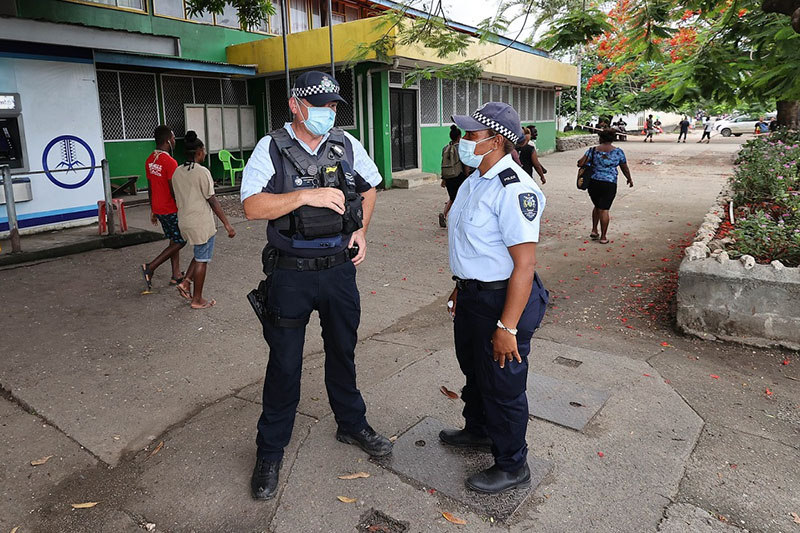 Chinese efforts to secure a deal with the Pacific islands that includes security matters such as training police have caused concern among policymakers across the region; but Dr John Coyne, head of the Australian Strategic Policy Institute’s Northern Australia Strategic Policy Centre, believes the long and strong policing ties between the islands and their colleagues in Australia and New Zealand will prove durable in the face of China’s open chequebook.

The CCP’s confidence in chequebook diplomacy has meant it’s overlooked Australia’s ‘thin blue line’ connection to the rule of law across the Pacific.

While many in Canberra will view the failed efforts of the Chinese Communist Party (CCP) to secure a regional Pacific agreement as a relief, Australia’s new government will have to deal with a steadily increasing number of bilateral security pacts between China and Pacific island countries.

A recently leaked document has given the world a glimpse of the CCP’s ambitions to rapidly expand its influence in the Pacific. China’s deal focuses on developing closer relationships with the Pacific on security matters, including training police.

Of course, this has many policymakers across the region worried. However, the CCP’s confidence in chequebook diplomacy has meant it’s overlooked Australia’s ‘thin blue line’ connection to the rule of law across the Pacific.

The region’s police forces were established under colonial rule, in most cases to control local populations. The police of the day were, for the most part, focused on dominating communities and being accountable to the regime and not the people. This sort of policing has strong similarities to the role and accountability of China’s police today.

This reform has resulted in a greater focus on democratic policing that prioritises protecting people rather than controlling them. Australian and New Zealand police have been on the frontline of this reform.

In the years that followed independence, Pacific island police were often not at the forefront of democratisation. Some were actively involved in conflict and the suppression of democracy. This created deep distrust between the people and the police in many Pacific nations, a legacy that has been hard to shift.

Over recent decades, democratic policing across the region has advanced in leaps and bounds. This is not an argument that there are no remnants of the old way remaining, but that law enforcement in these countries has undergone substantial reform.

This reform has resulted in a greater focus on democratic policing that prioritises protecting people rather than controlling them. Australian and New Zealand police have been on the frontline of this reform.

The Australian law enforcement community has deep and memorable multigenerational connections to policing in the Pacific, not just as donors but as partners. Sure, we buy equipment, but the relationship is about more than the security of the state.

For more than a decade, Australian Federal Police worked with police from the region in the Regional Assistance Mission to Solomon Islands. Now senior police from Papua New Guinea to Fiji and Solomon Islands to Vanuatu have deep connections with their counterparts in Australia and New Zealand.

Countries can’t buy these relationships, they must be earned over time and built on a firm foundation of shared experience and trust. There is also a shared understanding of the role of the police, which can’t be faked.

Australian police work with their fellow officers from across the region at the Pacific Transnational Crime Coordination Centre in Fiji, sharing information and intelligence daily. This has been the case for decades and those involved know Australia is there to stay.

Australian and New Zealand officers have for decades trained, and trained with, officers from across the Pacific. In doing so we have moved past the old colonial policing days.

Australian police have deep and multigenerational connections to the Pacific islands. Countries can’t buy these relationships, they must be earned over time and built on a firm foundation of shared experience and trust. There is also a shared understanding of the role of the police, which can’t be faked.

Pacific island police, like their counterparts in Australia, understand that to be effective, they must be accountable to the law and they must be responsible to a democratic government. To maintain public trust, they’ve learnt that they must be transparent. Just as important, they prioritise protecting people’s safety and rights.

While Chinese Foreign Minister Wang Yi has been seeking to sell China’s security deal to the region, he has arguably failed to recognise the fundamental incongruence between what the Pacific wants and what he is offering.

China’s police focus on protecting the CCP, not the Chinese people. They are not transparent in their decision-making and nor do they give priority to safety and rights.

Pacific people are familiar with regime policing and all its vices, and their governments have, over decades, overwhelmingly rejected it.

Australia needs to double down on its thin blue line investment in the Pacific. If China is to build police academies, let’s offer the trainers, curriculums and mentors to ensure that the region’s police reform continues towards democratic values and not authoritarian ones.

*For our non-Australian readers, ‘spruik’ means to talk showily or boastfully in public.

John Coyne is head of the Australian Strategic Policy Institute’s Northern Australia Strategic Policy Centre and strategic policing and law enforcement program. This article first appeared on the ASPI Strategist website, and is republished with permission; the original can be read here.