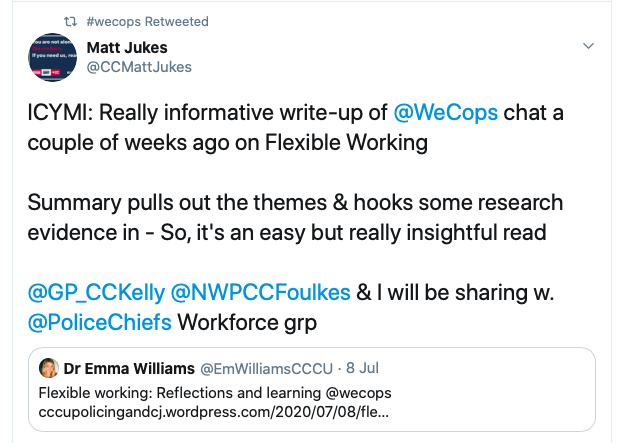 OPINION: The current pandemic has forced many industries to address questions of flexible working as a matter of some urgency. But for many in policing, flexible working is hampered by complex business needs as well as structural and cultural issues. Here, Sgt Caroline Hay and Dr Emma Williams present a @wecops Twitter debate on the issues.

Picking up the pieces: A @wecops chat on mental health

OPINION: The latest @wecops chat discussed a new report by Zoe Billingham of HMICFRS which looked at how effectively police respond to and support people with mental health problems. Sgt Caroline Hay summarises the discussion and the learning from it.

Profile
Caroline is a founding member of the Wecops team. She joined the Metropolitan Police at the age of 20 and has mainly completed the roles of response and neighbourhoods. Her favourite job is driving the area car, responding to emergencies and securing ‘the golden hour.’ In 2015, Caroline took part in the BBC documentary ‘The Met.’ Caroline went on to join Lambeth as a Sergeant on Neighbourhoods. Through this role, she has understood the importance of social media and what it offers the public and the police. The sharing of information and ideas is key.Caroline is now working as a front line response team Sgt on the North West Cluster for the Metropolitan Police (views all personal) and is in her final year of the Policing in Service degree.