Lord Bew, Chair of the Committee on Standards in Public Life, addresses an audience gathered to mark the launch of CoPaCC's "OPCC Transparency" Quality Mark

PCCs, their Chief Executives and representatives from their offices gathered last Wednesday for the presentation of the first CoPaCC OPCC Transparency Quality Marks. Hosted by the leading police auditor Grant Thornton, attendees heard from speakers including Lord Bew, Chair of the Committee on Standards in Public Life.

Lord Bew, referencing the Committee’s recent publication ‘Tone from the Top’ [Policing Insight subscribers see analysis] explained that the Committee’s fundamental role was to promote ethics and standards and not necessarily to examine the finer details of delivery. Taking a broad view, he noted that senior police officers are twice as likely to be believed by the public as cabinet Ministers, and that this bodes well for the policing service.

“Particularly in the current financial climate, the public will expect higher degrees of transparency, but – crucially – that information should be useful. So the key deliverable should not necessarily be publishing pages of data, but clearly setting out key pieces of information clearly and making this information both accessible and easily digestible”.

Lord Bew stated that transparency is key. Citing the example of the MPs’ expenses scandal, he explained that taking all of that previously private information and placing it in the public domain has effectively now made this a non-issue. The bright light of public scrutiny has effectively regulated and improved the situation without any further action.

However, this improvement has not impacted on public confidence levels. Whilst being transparent should be the default position as this is firmly the public expectation, transparency in of itself will not always have the considerable impact that one might expect.

Certainly PCCs will have to provide a significant level of transparency. ‘Tone from the top’ shows this picture is mixed, and interestingly there may be a disjoint as PCCs may say they are being transparent, whilst the polling shows that this is not necessarily reflected in the wider public view.

Particularly in the current financial climate, the public will expect higher degrees of transparency, but – crucially – that information should be useful. So the key deliverable should not necessarily be publishing pages of data, but clearly setting out key pieces of information clearly and making this information both accessible and easily digestible.

Finally, Lord Bew reflected on level of public engagement in the political process during his time in office. He concluded that the age of mass participation in politics is over, and that people do not necessarily want to engage, but when it comes time to vote they expect to be able to access the entire wealth of information without restriction. This, he said, was something we absolutely had to get right.

Paul Grady, Head of Police, and Iain Murray, Deputy Head of Police, took attendees through Grant Thornton’s 2020 Vision, a series of six scenarios designed to aid local public services in meeting the challenge of operating within the current financial climate.

Their models ranged from police forces being in a position of ‘adaptive innovation’ where they are free to creatively redefine their role and positively affect their operating environment through to ‘imposed disruption’ where forces are subject to imposed changes due to external constraints.

When asked the question “how do you feel about the financial position your police force is in now, compared with your expectation in November 2012?” over half the attendees considered reality was worse or significantly worse compared to their expectations. Well over three-quarters of attendees thought that the sector as a whole now was in a worse or significantly worse financial position compared to their expectations in November 2012.

Furthermore, whilst many attendees felt they were currently still able to adapt and innovate at the present moment, thinking about the future all were clear that this opportunity would be lost and they would be moving into more of a hand-to-mouth existence.

A number of PCCs noted the broad view that the sector as a whole is running to stand still at present, but in 5 years’ time financial and other circumstances would lead to imposed disruption being placed on the service.

Those in attendance noted that one manifestation of this change might be an increasing level of public order offences. A number of system wide changes could all contribute to a perfect storm – including a lessening in partner activity around wider prevention and rehabilitation activity, a primary police focus on enforcement activity, coupled with agencies such as local authorities and housing associations retreating from ASB activity.

Attendees also considered that wider opportunities around devolution may be missed as the sector as a whole is currently missing from the table where these conversations are happening. Generally speaking, PCCs lacked the confidence that the current configuration is sufficient to bring about the changes needed.

Bernard Rix, Chief Executive of CoPaCC talked attendees through CoPaCC’s interest in promoting the benefits of effective policing governance, explaining that this extends back to shortly after the first election of PCCs in November 2012. He reflected that today’s quality mark awarded built on the first analysis and presentations made in conjunction with Grant Thornton two years ago.

Explaining CoPaCC’s quality mark methodology, a voluntary request for information was sent to all OPCCs asking to be provided with links to their statutorily requirement information, and about their views on their levels of compliance. Following receipt of same, CoPaCC analysts undertook desk research to examine this published information and assess the ease of access of that information.

CoPaCC concluded that in terms of publishing the statutorily required information, OPCCs are much improved since two years ago, evidenced by the fact that approximately one half of all OPCCs are currently achieving CoPaCC Transparency Quality Mark standards. 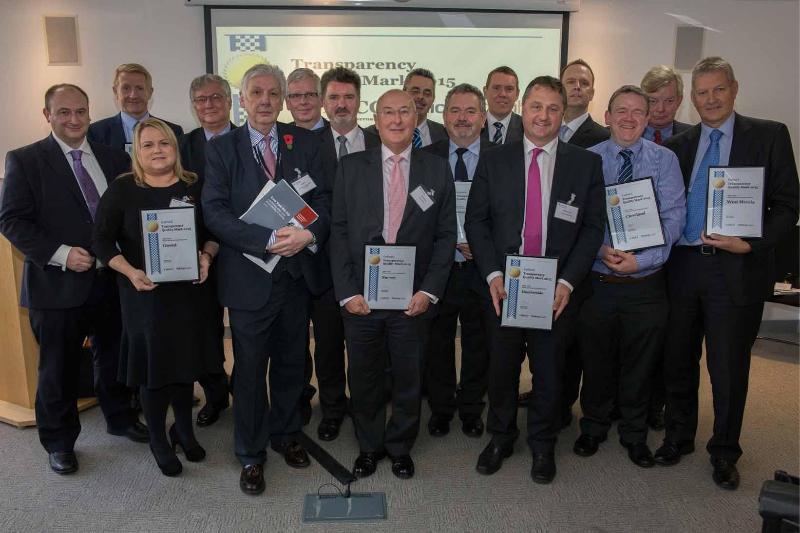 Further OPCCs who have also achieved the transparency quality mark will be presented with their award during November.