Why police reform won’t happen without public pressure on politicians 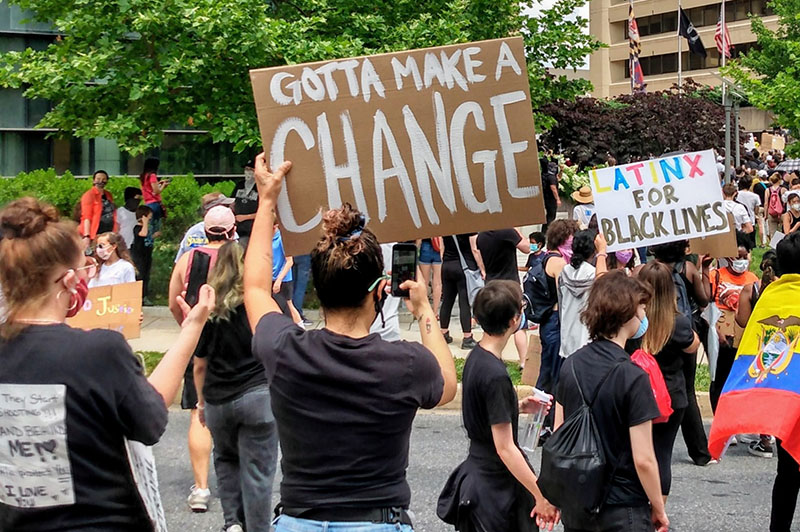 In the wake of the killing of George Floyd in America, further deaths and injuries to members of the public following police use of force have led to major protests and campaigns for police reform around the world, including Canada; but Professor Temitope Oriola of the University of Alberta argues that achieving reform requires pressure on politicians rather than policing.

Police accountability remains low in Canada despite incidents of civilian abuse and death. A recent CBC report found that only two officers were convicted in 461 cases of deaths of civilians between 2000 and 2018.

The lack of accountability in policing, particularly the reluctance to prosecute officers with records of civilian abuse, is intriguing given that no other occupation offers such a level of protection for any form of abuse.

The lack of accountability in policing, particularly the reluctance to prosecute officers with records of civilian abuse, is intriguing given that no other occupation offers such a level of protection for any form of abuse. Even in cases where officers are charged, the legal outcomes tend to be more favourable to police officers than civilians charged with similar offences.

For example, James Forcillo, the police officer convicted of attempted murder in the death of Toronto teenager Sammy Yatim, received full parole after serving four years of a six-year sentence. Such outcomes condone misconduct and create a toxic atmosphere for many hardworking police officers, who treat the public with dignity and respect.

No increase in oversight

Civilian oversight of police agencies and officers is increasingly the norm in democratic societies. However, at least six Canadian provinces and territories do not have any civilian oversight bodies and often depend on other police services to investigate officer misconduct.

Civilian oversight bodies in jurisdictions like Ontario, Québec and Alberta work at a glacial pace and often produce results that diminish public confidence.

Much remains unchanged since George Floyd’s death on May 25 in Minneapolis, Minnesota. Two days after Floyd’s death, Toronto woman Regis Korchinski-Paquet died from a fall shortly after police responded to her family’s call for assistance.

Video evidence from the incident was not made public, but selective leaks appeared in the Toronto Sun. The Special Investigations Unit (SIU) tasked with investigating Korchinski-Paquet’s death noted that ‘leaks of this nature detract from the public’s confidence, and the family’s confidence, in the integrity of the SIU investigation.’

The maltreatment of Indigenous people by the police remains a major problem. For example, Chief Allan Adam of the Athabasca Chipewyan First Nation released a video regarding his maltreatment by Wood Buffalo RCMP. Recounting the incident, the chief said: “I could feel that I was going unconscious and all I can remember is the blood gushing out of my mouth.”

The RCMP charged Chief Adam with resisting arrest and unlawful assault of a police officer. Prime Minister Justin Trudeau said he was “deeply alarmed” by the incident; the charges against Chief Adam were later dropped.

On 27 August, the CBC reported that the Edmonton Police Service was about to take delivery of a new $500,000 armoured tank ordered two years earlier. Edmonton Mayor Don Iveson described the new acquisition as “remarkably tone deaf… I’m not convinced that this is a reasonable expenditure, since they already have two.” CBC reporter Janice Johnston, who broke the news, noted the purchase was “never spelled out” in the budget; rather, it was listed under new vehicles.

Frank Iacobucci – a retired justice of the Supreme Court – emphasised the need to professionalise the police in his 2014 report on the response of the Toronto Police Service to individuals in mental distress.

This point was made in 1979 by American criminologist Jaganmohan Lingamneni, who argues that: “[P]olice departments for the most part, still function in an archaic and outmoded fashion. The officers generally resist change and innovation in the existing police structure and routine. Systems of reward and punishment as well as career development and promotional opportunity often tend to support the ‘semi-skilled labourer’ concept rather than law enforcement as a ‘profession’.”

A recent Canadian study researched the strategic plans of 23 Canadian police departments and found that they “vary considerably with respect to environmental scans; statements of values, vision and mission; descriptions of goals; (and) resources to be applied to goal achievement.”

Police departments are survival-oriented entities, not unlike other organisations. That is not a critique. It is a source of optimism. However, under what conditions do police organisations change?

While the findings were not unexpected, it is intriguing that the police departments also varied “in indicators to be used to assess success and inform … action” and pay “limited attention to statements of strategic purpose.”

Police departments are survival-oriented entities, not unlike other organisations. That is not a critique. It is a source of optimism. However, under what conditions do police organisations change?

However, as sociologist Monique Marks cautions in her study of South African police organisations: “New policies and legislation do not automatically bring about desired transformation within the police.”

Are police departments reformable? The answer is both yes and no.

No, because it is not entirely in the hands of the police. Reforms can be initiated by the entities outside policing that criminologist Matthew Matusiak calls “institutional sovereigns”. Reforming the police is not only about operations, strategic plans, existing legislation or policy. It is an implicitly and explicitly political question.

Therefore, rather than protest in front of police stations or against police officers, protests should be directed at elected politicians, who have the power to make change. Those seeking reforms should also work to elect leaders in favour of police reforms.

When asked about Commissioner Lucki’s statement, Prime Minister Trudeau replied: “Systemic racism is an issue right across the country, in all our institutions, including in all our police forces, including in the RCMP.” Barely 24 hours after Trudeau’s comment, Commissioner Lucki changed her perspective, clarifying: “I did not say definitively that systemic racism exists in the RCMP. I should have.”

The impetus to reform rarely comes from within police organisations. Here, the Prime Minister communicated a strong and unambiguous political position. Commissioner Lucki was arguably aware she could not maintain her position while at odds with the federal government. The lesson? Police departments will align their positions with their understanding of the standpoint of the political authorities.

Other institutions with significant impact on the quality of policing include all elected leaders, particularly mayors, premiers and justice ministers. The media, academia, think tanks and labour unions are crucial.

Major reforms in the Minneapolis police occurred two months after George Floyd’s death and are directly connected to the axes of political power in the state: a mayor and governor from the Democratic Party in favour of reforms.

Therefore, rather than protest in front of police stations or against police officers, protests should be directed at elected politicians, who have the power to make change. Those seeking reforms should also work to elect leaders in favour of police reforms. The public must hold elected politicians responsible whenever there is any unnecessary use of force or death of a civilian at the hands of the police.