Policing InsightFeaturesOpinionThe extremism visible at the parliament protest has been growing in NZ for years – is enough being done?

The extremism visible at the parliament protest has been growing in NZ for years – is enough being done? 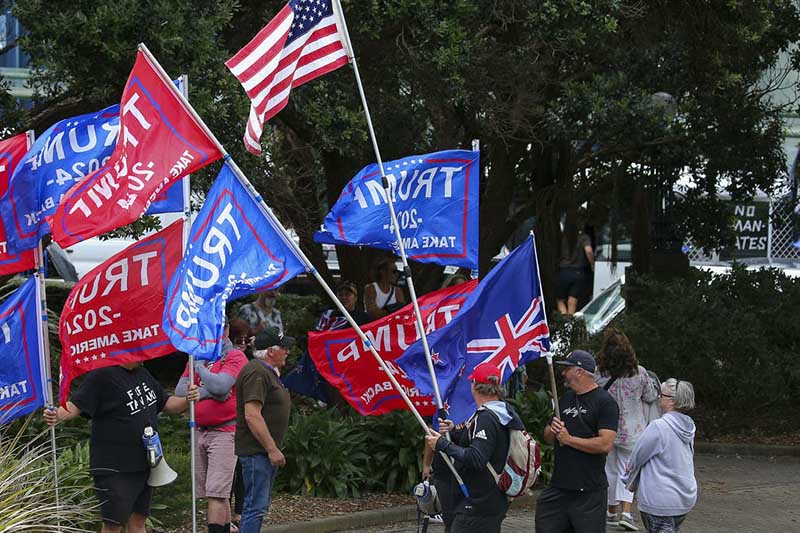 The lengthy ‘vaccine mandate’ protests in front of New Zealand’s Parliament in Wellington have been challenging to police, and have attracted a wide range of extreme activists; Massey University Professor Paul Spoonley argues that such extremism has been evident in New Zealand society for some time – more information and action will be needed to tackle it going forwards.

It has been interesting to watch media and public commentators come to the realisation – sometimes slowly – that the siege of the New Zealand Parliament was not simply an anti-vaccine mandate ‘protest’ but something with more sinister elements.

These politics have been developing for some time, heavily influenced by the rise of a particular form of conspiratorial populism out of Donald Trump’s America, and by the networking and misinformation possibilities of social media.

While researchers and journalists have noted the toxicity of some of the politics on display, as well as the presence of extreme fringe activists and groups, it should have come as little surprise.

These politics have been developing for some time, heavily influenced by the rise of a particular form of conspiratorial populism out of Donald Trump’s America, and by the networking and misinformation possibilities of social media.

Internationally, researchers noted a decisive shift in 2015-16 and the subsequent exponential growth of extremist and vitriolic content online. This intensified with the arrival of conspiracy movement QAnon in 2017 and the appearance of a number of alt-tech platforms that were designed to spread mis- and disinformation, conspiracy theories (old and new), and ultranationalism and racist views.

While local manifestations developed slowly, there was evidence that some groups and activists were beginning to realise the potential. The Dominion Movement and Action Zealandia embraced these new politics – white nationalism, distrust of perceived corrupt elites and media – along with the relatively sophisticated use of social media to influence and recruit.

These anti-authority, conspiratorial views have been around in New Zealand for some time within the anti-1080, anti-5G and anti-UN movements.

But we began to see the formation of a loose political community around the 2020 general election. It was notable, for instance, that online material from the Advance NZ party had 30,000 followers and their anti-Covid material was viewed 200,000 times.

Covid gave new impetus to these movements, partly because the pandemic fed many of the now well-established tropes of those inclined to believe in conspiracies – the role of China, government “overreach”, the influence of international organisations like the UN or WHO, or the “malign” influence of experts or institutions.

Covid not only encouraged others to be convinced that conspiracies were at work, the lockdowns also meant more were online and more were likely to engage. QAnon proved to be a key influence.

The election saw Advance NZ (and the NZ Public Party), along with the New Conservatives, the Outdoor Party and Vision NZ all peddle versions of Covid scepticism, the distrust of elites or of ethnic and religious “others”.

Combined, they received 2.73% of the party vote and 3.01% of electorate votes. Not large, but related online activity was still troubling.

The alt-right in NZ

By mid-2021, when the Institute for Strategic Dialogue (ISD, a UK-based research organisation) undertook a study for the Department of Internal Affairs of New Zealand’s extreme online activity, things had ramped up yet again.

Those numbers should give us all pause for thought. The volumes, the relatively high density, the extensive use of QAnon and the mobilisation of a not insignificant part of the New Zealand community indicate the alt-right and its fellow travellers were now well and truly established here.

The ‘sovereign citizens’ at parliament

This is reinforced by the Department of Internal Affairs’ digital harm log. Not only are the numbers growing, but the level of hate and threats directed at individuals and institutions remains high.

For some time, the so-called ‘sovereign citizens’ movement has been apparent in New Zealand, again heavily influenced by similar American politics. Laws and regulations are regarded as irrelevant and illegal, as are the institutions that create or enforce them.

In this context, it’s not surprising to see these ideologies surface at the occupation of parliament grounds, or the fractious and divided nature of those attending, and that their demands are so diverse and inchoate.

Nor should it come as a surprise that the protesters display a complete unwillingness to trust authorities such as the police or parliament.

For some time, the so-called ‘sovereign citizens’ movement has been apparent in New Zealand, again heavily influenced by similar American politics. Laws and regulations are regarded as irrelevant and illegal, as are the institutions that create or enforce them.

What’s perhaps more surprising is that New Zealanders have generally not known more about these politics and the possibility they would produce the ugly scenes at parliament.

While there has been some excellent media coverage, there has been a sense of playing catch-up. The degree of extremism fuelling the protests and the various demands appeared to catch parliament and the police off guard.

Our security and intelligence agencies are devoting more resources to tracking these politics – but they need to be more public about it. The Combined Threat Assessment Group and the SIS provide updates and risk assessments, but these often lack detailed information about local activists and actions. We need to be better informed.

The police are enhancing existing systems to better record hate crimes and activities (Te Raranga), which should become an important source of information.

And the Department of Prime Minister and Cabinet will be announcing some of the details of the new centre of excellence, He Whenua Taurika, that will provide evidence of local developments.

If many New Zealanders have been surprised and saddened about the extremist politics visible at the parliament protest, there is now little excuse for not understanding their background and momentum. The challenge now is to ensure further hate crimes or violence do not follow.

Distinguished Professor Paul Spoonley is one of New Zealand’s leading academics and a Fellow of the Royal Society of New Zealand. He joined the Massey University staff in 1979 and was, until becoming Pro Vice-Chancellor in October 2013, the College’s Research Director and Auckland Regional Director. He has led numerous externally funded research programmes, and has written or edited 25 books. In 2010, he was a Fulbright Senior Scholar at the University of California Berkeley and in 2013, a Senior Visiting Fellow at the Max Planck Institute of Religious and Ethnic Diversity in Goettingen.

This article first appeared on The Conversation website, and is republished here under a Creative Commons Licence; the original can be read here.