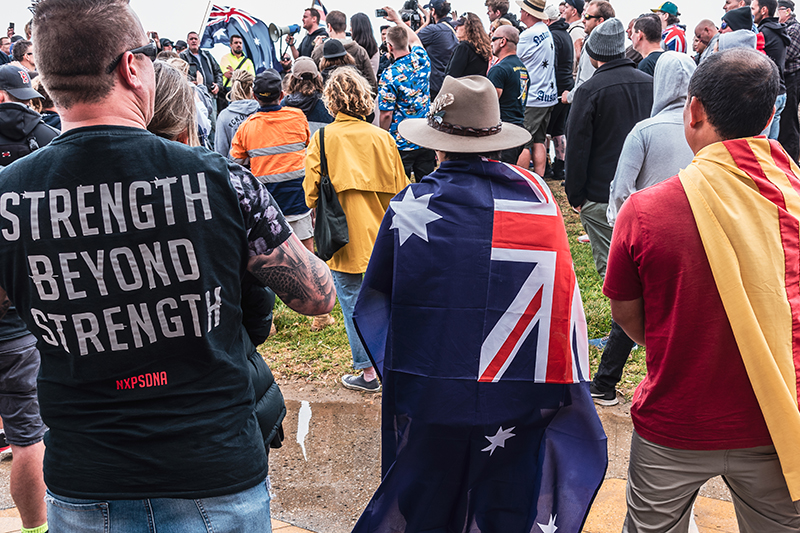 While the UK, North America and Europe have taken steps to list violent far-right groups as terrorist organisations, Australia has been slower to make the same move; Analyst Dr Teagan Westendorf of the Australian Strategic Policy Institute believes it’s important to do so soon – and in a meaningful way – to enable police to tackle the threat.

The 2019 Christchurch massacre woke Australians up to the intent of right-wing extremists and their capability to act on violent ideologies. COVID-19 has left many young Australians isolated and vulnerable to the far-right’s hate messaging, which has surged globally and is showing its face domestically with more audacity and coherence than ever before.

All four of Australia’s partners in the Five Eyes intelligence-sharing network have taken steps to list right-wing extremist organisations as terrorist groups. Australia needs to do the same, and in a meaningful way.

This dangerous combination of events led to the Parliamentary Joint Committee on Intelligence and Security inquiry into extremist movements and radicalism in Australia, which is due to report in April.

Fierce debate on political and legal censure of far-right groups has surrounded the review. Home Affairs Minister Peter Dutton recently indicated that one far-right violent extremist group, the UK-based Sonnenkrieg Division, is set to be listed as a terrorist organisation, despite Australian intelligence agencies saying no Australians are known to be involved in the group.

It’s unclear if other groups with closer connections to Australian far-right activity will also be listed, like the newly amalgamated Nationalist Socialist Network that recently held a very public training and networking camp in Victoria. Neither is it clear how the Government plans to regulate these groups’ activity online.

All four of Australia’s partners in the Five Eyes intelligence-sharing network have taken steps to list right-wing extremist organisations as terrorist groups. Australia needs to do the same, and in a meaningful way. It’s vital that the listing of far-right groups is done with the same rigour and guidance by intelligence agencies as the listing of Islamic terror groups, rather than as a token gesture to fend off criticism that the far-right threat is not being taken seriously enough.

Canada recently added four far-right and nine Islamic violent extremist groups to its terror list. The four far-right groups are all white supremacist groups that seek societal collapse and restructure through violent means, and that have links to other cells and groups internationally.

Legal sanction of members and affiliates by banning travel, seizing assets and blocking business transactions is intended to stop groups recruiting, radicalising and acting on their threats, by disrupting their communication and funding channels.

The far-right threat in Australia is similar in terms of ideology to that in North America and Europe, even if on a much smaller scale in terms of capability.

Australia faces a significant and growing threat from far-right violent extremist groups. By late last year, 30-40% of the Australian Security Intelligence Organisation’s (ASIO) counter-terrorism caseload involved the far right, up from 10-15% before 2016. Yet Australia’s list comprises only Islamic extremist groups.

The far-right threat in Australia is similar in terms of ideology to that in North America and Europe, even if on a much smaller scale in terms of capability.

Like modern organised crime syndicates, terror groups have projected their activities globally. Spurred on by political events, online activity and successful attacks by like-minded groups and individuals, far-right terrorism has become an interconnected network giving those involved their own global echo chamber to encourage and enable each other.

Brenton Tarrant, the Christchurch gunman, was inspired to act by white extremist attacks in the US, UK and Europe and, in turn, has become an inspiration for right-wing extremists worldwide.

This network needs to be met with a cooperative, international policing response. Australian agencies should be legally enabled to contribute to this effort by comprehensively denying these groups the time and space to recruit, encourage and support terrorist attacks.

Adding far-right violent extremist groups (not to be confused with those that are far-right but non-violent) to Australia’s list presents two valuable ways to police the increasingly organised threat they pose.

If ASIO finds a group warrants inclusion on the terror list, shutting down its online activities to plan and finance violent attacks can’t be confused with censoring free speech.

Second, it provides a much-needed legal framework for regulating far-right groups’ activity online. We know that social media platforms and chatrooms, from Facebook to 4chan, have provided the mediums for extremist individuals and groups to connect, organise and mobilise over the past decade.

This second element is crucial and has so far been precluded by debates about free speech and the responsibility private companies have to regulate activity that can culminate in violence. The inability of Australia’s public discourse and politics to move beyond a tennis match of free speech versus hate speech (demonstrated most recently by political theatrics during debate of a Senate motion to condemn far-right extremism) stands in the way of intelligence and police responses to the threat.

This must be supported by evidence that the terrorist act is likely to happen in Australia. In acting on ASIO’s advice, the minister must ensure this list is used as a scalpel, not a hammer or a token.

The process is not intended to give the minister the power to censor far-right or far-left speech online. If ASIO finds a group warrants inclusion on the terror list, shutting down its online activities to plan and finance violent attacks can’t be confused with censoring free speech.

While it’s conscientious for private companies to take responsibility for the activity they tolerate on their platforms, it’s a nation’s responsibility and purview to use domestic law to regulate the planning and financing of criminal activity within its borders.

Providing law enforcement with the legal framework to regulate far-right groups’ activity on and offline puts the responsibility of preventing terrorist attacks where it belongs, with police.

The recent standoff between the Government and Facebook over news content showed that the lines between the responsibilities and influence of transnational corporations and governments have become blurred, where sovereignty once provided a clear demarcation. We can’t rely on social media corporations to regulate terrorist activity online because their business strategy is not designed to prioritise enabling policing, nor should it be.

Home Affairs Minister Peter Dutton is right – legally proscribing a terrorist organisation is not a political decision. It’s an intelligence and policing decision.

Providing law enforcement with the legal framework to regulate far-right groups’ activity on and offline puts the responsibility of preventing terrorist attacks where it belongs, with police. And it puts private companies where they belong, which is being accountable to the legislation that applies in the nations in which they operate.