Policing InsightFeaturesAnalysisRoad crashes, assaults and being spat on: The dangers facing Australian police in the line of duty

Road crashes, assaults and being spat on: The dangers facing Australian police in the line of duty

AUSTRALIA: Following the horrific deaths of four Victorian police officers, Dr. Kelly Hine, a lecturer in criminology at Australian National University, looks at how Australian officers are sustaining injuries and other medical conditions, and how often are officers dying in the line of duty.

The horrific deaths of four Victorian police officers during seemingly routine traffic duties have brought the dangers of policing into sharp relief.

Similar to the recent Victorian fatalities, Australian police officers mostly died due to accidents (65% of all police fatalities), with road accidents being the leading cause

There are many threats to officers while they carry out their duties, some more extreme than others. In a declaration about the seriousness and risk of spitting, and just how common it is, states and territories have introduced additional laws (aside from common assault) to deal with people deliberately spitting, sneezing and coughing on police and other essential services personnel.

So, exactly how are our officers sustaining injuries and other medical conditions, and how often are officers dying in the line of duty?

The National Police Memorial honour roll commemorates Australian police officers who have been killed or died while on duty in recognition of their contribution to the Australian community. An examination of these fatalities from the past two decades provides some revealing insights.

There were 51 officer fatalities in Australia between 2000 and 2019, an average of two to three a year. Until the recent deaths in Victoria, there has not been so many deaths in Australia in a single year since the deaths of five officers in 2005. However, those fatalities were all separate incidents. Sadly, in 2001, four officers died in the same plane crash.

Officer fatalities have three main causes: accidents, assaults and health-related incidents. Similar to the recent Victorian fatalities, Australian police officers mostly died due to accidents (65% of all police fatalities), with road accidents being the leading cause.

These deaths tend to occur during seemingly low-risk activities such as general duties patrols. Most of these accidents involve motor vehicles (55%), while 21% involve motorcycles. However, as previously mentioned, there have been plane crashes (21%) and there was one accidental shooting.

Most police fatalities are due to an accident 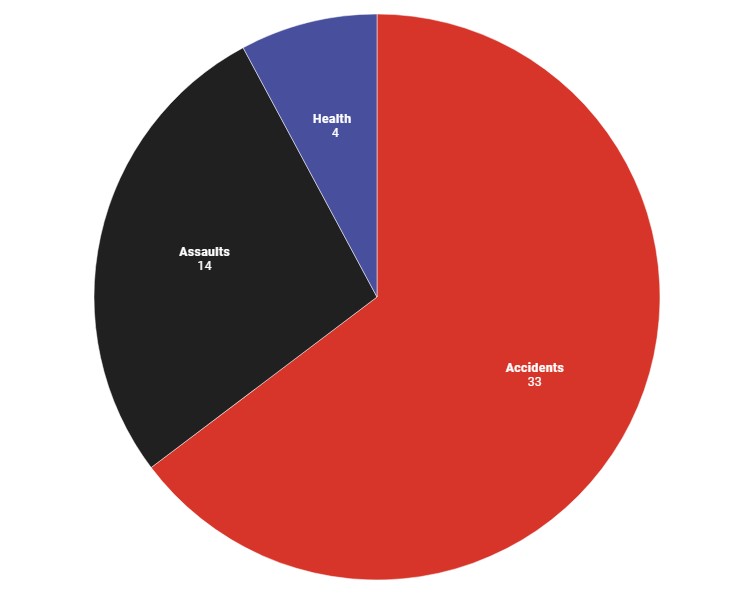 So what changed? This decrease might be explained by technological advances and changes to practices. For example, the Australian Design Rules changed motor vehicle safety standards to increase the safety of airbags in 2006.

Categories of police fatality over time

Also, police forces adopted more helicopters into their fleets. The use of helicopters for police pursuits may reduce the necessity for officers to engage in high-risk vehicle pursuits, and therefore decrease the number of accidents.

Finally, an inquest into the death of Senior Constable Peter Wilson led to changes to roadside policing practices, which may also have contributed to the decrease in fatalities.

However, officers face not only accidents, but also assaults and homicides – not typically faced in most other occupations. In the past two decades, there were 14 assaults on police. While these were almost always shootings (11 of the 14 cases), in one incident the driver of a stolen vehicle purposefully swerved to hit an officer.

Furthermore, the stressful and physical nature of policing can lead to health-related fatalities. While mental health fatalities, such as suicide, are not included in the data, physical health-related incidents are included. Over the past 20 years, four officers have died due to health-related matters while on duty. Three of these cases involved a cardiovascular event such as a heart attack during training. In the fourth case an officer died from a respiratory illness.

This last fatality highlights current concerns during these coronavirus times. While the cause of this officer’s death is unknown, there are strong concerns for the safety of our officers who we rely upon in times of crisis and to protect our community.

Indeed, a recent study of significant events in Queensland found almost half (44%) of the officers involved in these events reported sustaining an injury. These mostly involved officers being spat on or bitten (36% of injuries reported). This is concerning because of the risk of viral infections (all these officers required testing for infection) and work-related anxiety.

The study argues these types of attacks are indicative of opportunistic assaults; that is, the offender takes advantage of the situation and attacks an officer. Furthermore, being spat on is often viewed as insulting and disgusting, which may cause negative reactions from police and society.