The truth about TASER: How do TASER energy devices protect officers and subjects alike? 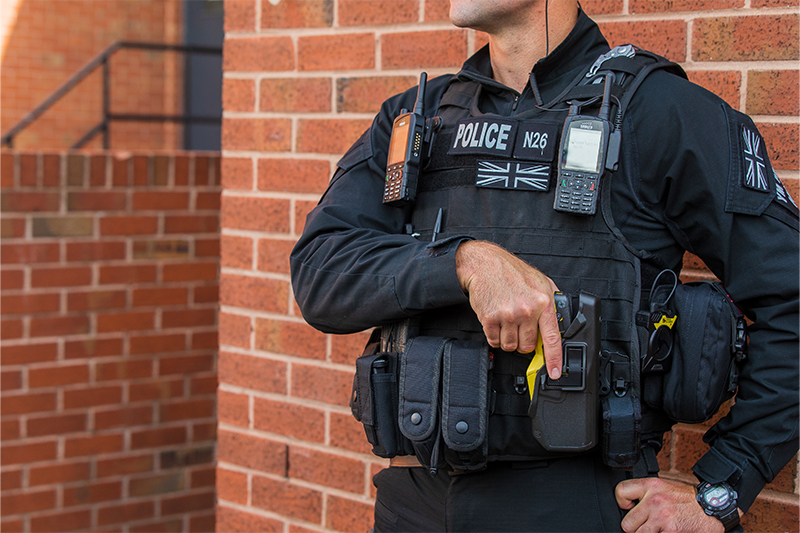 Front-line police deserve to be protected by equipment that not only protects them, but the public too. TASER technology is one of the most studied, safe and effective means of quickly stopping a threat. In this article, we’ll dig into the research around TASER energy devices and address misconceptions and myths.

Front-line police deserve to be protected by equipment that not only protects them, but the public too. This was the vision behind TASER energy devices, less-lethal devices that were designed and created to make the world a safer place. With over 850 reports, abstracts, letters, studies, and resource materials, and more than 5 million field deployments in nearly 30 years, TASER energy devices are proven to be the most safe and effective less-lethal tool on an officer’s belt.

TASER technology is one of the most studied, safe and effective means of quickly stopping a threat. So, why are there so many misconceptions and myths around TASER energy devices? As with most topics shrouded in mystery, the misconceptions stem from a lack of understanding.

Let’s look at some of the most frequently asked questions related to TASER energy devices and better understand a less-lethal technology that has been integral in saving more than 275,000 lives from death or serious bodily injury.

How do TASER energy devices make officers and subjects safer?

“Officers deserve the protection it [TASER] affords them,” says Simon Chesterman, the Armed Policing Lead for the National Police Chiefs’ Council (NPCC) in the UK [3].

Likewise, TASER energy devices result in safer outcomes for subjects as well. Seattle Police Department in the United States reported a 48% reduction in suspect injury in use of force incidents following the introduction of TASER energy devices [4]. In France, there was a 15% decrease in lethal force firearm usage against suspects in volatile situations [5]. 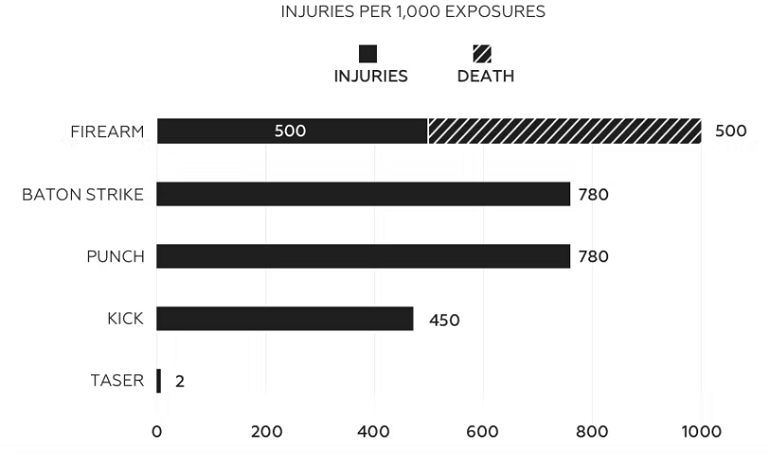 Does every use of a TASER energy device have to be a full deployment?

No, in many cases, drawing and displaying a TASER energy device without an actual deployment is sufficient to safely resolve a situation. A UK police study showed that in 81% of cases, simply displaying a TASER energy device was enough to gain compliance from a subject and de-escalate the incident [8]. The figures rose to 88% of subjects surrendering after a TASER was displayed in Finland [9] and 93% in Ontario, Canada [10]. This intervening step helps offer a layer of protection in dangerous situations to de-escalate. “It can be seen that the use of the TASER [energy device] prevented police officers from having to use more force on dozens of occasions,” noted a report on pilot deployments in Central, East, and North Netherlands, as well as Rotterdam, the Netherlands [11].

Furthermore, law enforcement and professional TASER energy device models released after 2011 are designed on an all-digital platform, allowing the energy weapon to provide objective analytics of use.

Unlike all other force options, the TASER energy device records event logs for every user action, including safety activation and trigger event duration with times and dates. Pulse logs also display an objective pulse-by-pulse record of delivered electrical output. This information is recorded for safety and objective accountability. TASER logs can be ingested into Axon Evidence and linked to evidence files and BWV footage to create a more comprehensive view of an incident for investigation purposes.

Q: Is electrocution a concern when using TASER energy devices?

A: TASER energy devices are designed to temporarily incapacitate a subject only as long as the electrical cycle, meaning the subject can recover immediately and most feel no residual side-effects. There are no known long-term effects from being exposed to a TASER energy device. This is significant given that there are more than 850 reports, abstracts, studies and reference materials on TASER energy devices, in addition to approximately 5 million field deployments over 25 years.

Q: Will a TASER energy device stop a pacemaker?

A: Contrary to popular belief, what makes electricity dangerous to humans doesn’t have much to do with voltage, but rather with current. When voltage passes through an object or subject at a very high current, that can be dangerous. TASER energy devices use a relatively low current, which provides a reliable safety profile and allows them to be classified as less-lethal weapons.

Q: Ok so voltage isn’t as dangerous as current, but still, how many volts of electricity does a TASER energy device deliver?

Q: Are TASER energy devices and stun guns the same?

A: No, TASER energy devices and stun guns are not the same. With the average stun gun, the weapon works by inflicting localized pain to discourage a particular behavior. The weapon is turned on and driven into an attacker (drive-stun), allowing electricity to travel through their outer layer of skin and deliver a sharp pain for as long as the weapon is held in contact with the exposed area.

TASER energy devices use electrical current to induce neuromuscular incapacitation. When a TASER energy device is deployed at a distance, 2 probes are released from the weapon. When both of these probes enter a subject, a circuit is created. Basically, we send a signal to all the muscles in between the 2 probes telling them to flex. For these few seconds, the subject is not controlling these muscles, and thus they become immobilised. This is the same technology you see in off-the-shelf muscle stimulators used for rehab and muscle therapy.

Note that some TASER energy devices can be used in both drive-stun and probe mode, but probe mode is preferred because it is much more effective in stopping a threat.

Q: Do TASER energy devices work better if they are deployed closer to a subject?

A: When a TASER energy device is deployed, 2 probes are released from the weapon at a pre-determined angle. When these probes make contact with a subject, the area between the 2 probes will receive the signal to flex.

So, the closer you deploy a TASER energy device to a subject, the less distance there will be between the probes. This means there is less muscle mass to stimulate, generally resulting in lower NMI. It is recommended that the probes be at least 12 inches apart to have the greatest potential for NMI. Different TASER energy devices deploy probes at different angles.

Q: Can TASER energy devices be energised for longer than their initial cycle?

A: TASER energy devices are designed to incapacitate a subject long enough for law enforcement to secure the subject or for civilians to begin to move away from aggressors. However, TASER energy devices can be used on a single subject for longer than the initial 5-second cycle where justified. A user can deploy a back-up cartridge to maximise probe spread and improve NMI effectiveness, or re-energise probes that have already made a successful connection when compliance is not yet achieved. Either scenario would incapacitate a subject for another electrical cycle or for as long as probes are re-energised. It is therefore imperative for both public safety and civilians to be trained on TASER best practices and follow any agency or state policies and laws that that guide TASER energy device use.

Q: Are TASER energy devices intended for one time use?

TASER, TASER 7, X2, X26P, Bolt 2, Pulse and Pulse+ are trademarks of Axon Enterprise, Inc., some of which are registered in the United States and other countries. For more information, visit axon.com/legal. All rights reserved. © 2023 Axon Enterprise, Inc