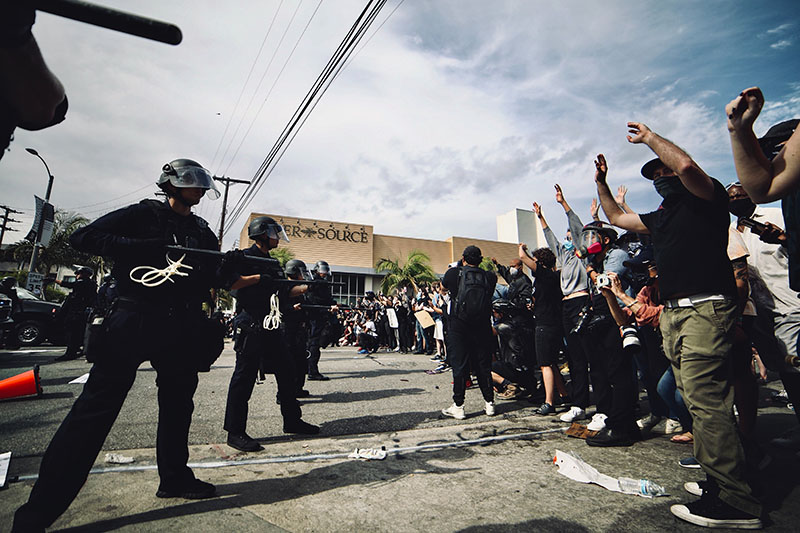 The American presidential election was fought against a backdrop of protest, division and unrest, with law and order and policing more politicised than at any time since the 1960s; Professor Temitope Oriola of the University of Alberta believes legislation is needed to prevent a repeat of similar politicisation in the future.

American police have been inserted into the 2020 presidential elections in ways arguably unseen since the 1960s. Three days before the 3 November elections, a group of Black voters marching to a voting location in Graham, North Carolina, was pepper sprayed by police. The police deemed the march “unsafe and unlawful,” while civil rights organisations referred to police intervention as “voter intimidation.”

Chantal Stevens, the executive director of the American Civil Liberties Union of North Carolina, noted that there should be “a way to close the book on voter suppression and police violence if we are to start a new chapter in our story that recognises the importance of protecting everyone’s right to vote.”

I have always told my introductory criminology students that to know where power lies in a society they need to ask three related questions: Who are the police officers? Who are the majority of those brought before the courts for criminal activities? Who are those in prison?

The police constitute both a critical infrastructure and symbol of political power. Around the world, police and politics are intertwined in deeper ways than may seem evident.

Police and politics are ‘terrible twins’ – policing is highly sensitive to the political climate, and the process for appointing police chiefs is not necessarily apolitical.

British criminologist Robert Reiner’s 1985 book, The Politics of the Police, engages with the seemingly inevitable tendency of the police to get embroiled in controversies and political contestations. British sociologist Jock Young points out that through managing social behaviours, the police are important markers of who belongs inside civil society.

Police and politics are ‘terrible twins’ – policing is highly sensitive to the political climate, and the process for appointing police chiefs is not necessarily apolitical. The effects are felt in the number of sworn officers, number and types of policing tools and technologies and arguably, conduct of officers.

Prior to the 2020 election, United States President Donald Trump was generally reluctant to criticise the police for excessive use of force. In 2017, Trump gave police advice for when making arrests: “Please, don’t be too nice.” His infamous response to mass protests across the US after the death of George Floyd was “when the looting starts, the shooting starts”.

Such comments earned Trump tremendous support among police unions. For example, the Police Benevolent Association, the largest police union in New York, endorsed Trump in August and thereby “broke with a longstanding tradition of not endorsing presidential candidates”.

Public demonstrations over police violence in the US became a watershed moment for defining who was considered a friend of the police. Any critique, however objective and balanced, seemed unwelcome.

Joe Biden advocated for police reforms and took a knee while mourning with families of victims of police violence. These appeared to have alienated him from police organizations.

Bill Johnson, the executive director of the National Association of Police Organizations, responded that: “For Joe Biden, police are shaking their heads because he used to be a stand-up guy who backed law enforcement.” Trump, on the other hand, became the beneficiary of politicised policing.

Political policing was evident in the buildup to and during voting in the 2020 election. While on board an armoured tank deployed to control non-violent people protesting against police brutality, a police officer thanked an armed militia, stating: “We appreciate you guys, we really do.”

On 25 August, 17-year-old Kyle Rittenhouse opened fire on a Black Lives Matter protest, and is facing charges in the fatal shooting of two people and injuring of a third. Rittenhouse considered himself a militia member and was “obsessed with blue lives matter”, a counter movement in support of police.

The Rittenhouse episode demonstrates a mutually intelligible correspondence between Trump and the police regarding whose violence could be condoned.

Trump’s silence in the face of police violence was rewarded with loyalty and support in the 2020 election.

During the elections, a Miami police officer wore a ‘Trump 2020’ face mask at a polling booth. His action was considered “voter intimidation” and questioned the impartiality of police officers regarding the outcome of the elections.

Here is @CityofMiami Police Officer Daniel Ubeda, in full uniform with badge and gun wearing his Trump mask inside of the polling location in government center.

This is city funded voter intimidation.

Ubeda should be suspended immediately. pic.twitter.com/TbJxu6mcem

Michael McHale, the president of the National Association of Police Organizations that represents about 1,000 police unions, put the police union’s perspective succinctly at the Republican Party’s national convention in August: “Your choices are the most pro-law-enforcement president we have ever had or the most radical anti-police ticket in our history.”

Speaking out against police violence cost Biden the support of a union that supported Barack Obama and Biden in 2008 and 2012. Following Hillary Clinton’s electoral upset, investigative journalist Michelle McPhee described the police as “the hidden Trump voter.”

Police unions and departments have historically played a role on issues relating to law and order, welfare of officers and associated policy. Citizens employed by police departments and unions also have the inalienable right to vote. These two roles need to be separated from brazen partisanship to influence electoral outcomes.

Politicised policing intimidates voters from certain demographics… It erodes police legitimacy, as they become viewed as a mere tool in the hands of a political candidate or party.

These issues have consequences for the police and the idea of democracy. Politicised policing intimidates voters from certain demographics. It emboldens regular citizens to take on policing duties at polls and serve as self-appointed vote watchers. It erodes police legitimacy, as they become viewed as a mere tool in the hands of a political candidate or party.

The inability of people to vote due to fear of violence or intimidation by police such as the pepper spraying of marchers going to the polls may make the difference in highly competitive electoral contests. Voter suppression produces undemocratic outcomes. Disenfranchisement of segments of the population is one probable consequence, as people may fear for their lives given the history of sectarian violence in the US.

The erosion of democracy is often a painstakingly slow process with a definite end. One state governor in Nigeria criticised the police for direct interference in an election, accusing them of supervising ballot snatching and providing cover for those reported to be engaged in illegal sharing of money on election day.

The conduct of US police is not yet at that level. However, whoever wins the 2020 presidential election must enact measures to control police politicisation.

Photo by Joseph Ngabo on Unsplash