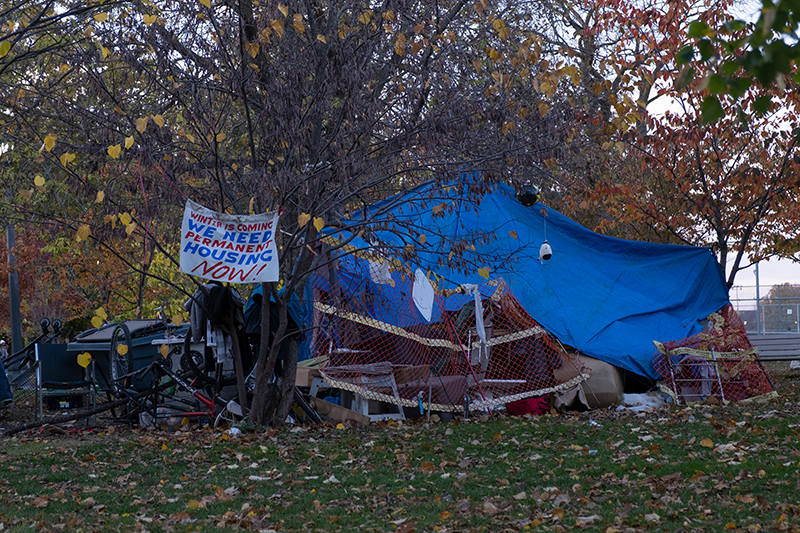 Operations by police and security teams to clear homeless encampments around the city of Toronto have been defended as an attempt to ensure the safety of occupants and the general public; however, Professor Joe Hermer of the University of Toronto argues that not only is this untrue, but it also represents a betrayal by police and the mayor, who had previously pledged to listen to and build a relationship with the city’s most marginalised and vulnerable people.

Dozens of police officers and city officials descended on Alexandra Park in Toronto recently to destroy the shelters of close to 20 homeless people.

Mayor John Tory and the Toronto Police insist that these operations are a way to “ensure the safety of encampment occupants” and the general public. Neither is true.

The next day, police took their demolition show to Lamport Stadium Park and guarded city bulldozers while they mowed shelters to the ground. Both of these operations saw an increase in the violence from June when Trinity Bellwoods Park was raided for the same destructive purpose.

Mayor John Tory and the Toronto Police insist that these operations are a way to “ensure the safety of encampment occupants” and the general public. Neither is true.

Do experts have something to add to public debate?

We think so. These police raids terrorised already traumatised people, and have taken away the last space they have to survive. Most of the displaced residents remain unhoused and are likely to be exposed to even more dangerous circumstances away from the support that the encampments offered.

The widespread criticism of these evictions focuses on the human rights breaches that have occurred. But what is equally troubling is that promises made by the police to be more accountable to marginalised communities have been exposed as a fraud.

More than a year after the death of George Floyd in the United States and historic protests for police reform, it’s clear that the Toronto Police are insincere about changing how they treat historically over-policed and criminalised communities.

Just a few months ago, both the Toronto police chief and mayor accepted the recommendations of Missing and Missed: Report of The Independent Civilian Review into Missing Person Investigations.

The report came after an inquiry that was established in response to criticism that the police did not take missing persons reports seriously about six of the eight gay and bisexual people who were murdered by serial killer Bruce McArthur between 2010 and 2017.

In her meticulous analysis, Justice Gloria J. Epstein, an independent reviewer of the report, found that while some dedicated officers did excellent work, the overall investigation had “serious flaws” and was marred by “systematic discrimination.” The report made clear that, while those murdered were part of the LGBTQ2S+ community, “these victims were marginalised and vulnerable in a variety of ways.”

In their response, Tory and Police Chief James Ramer vowed to listen to and build a relationship with the very same people who are now being beaten and pepper-sprayed, and having their shelters bulldozed.

A major theme of the 151 inquiry recommendations is the absolute necessity of repairing the badly damaged trust between the Toronto Police and marginalised communities, which include racialised and Indigenous people, those experiencing homelessness and people with mental health issues.

In other words, repairing trust with the very people who are most likely to have been forced to take shelter in homeless encampments in Toronto parks in order to survive the pandemic.

Those who take refuge in encampments tend to be the most vulnerable and victimised of people experiencing homelessness, and are more likely to have complex needs that are poorly served by the shelter system.

In their response, Tory and Police Chief James Ramer vowed to listen to and build a relationship with the very same people who are now being beaten and pepper-sprayed, and having their shelters bulldozed.

Tory pledged that he was “personally committed” to renewing a relationship with vulnerable communities, including homeless people. He stated: “The safety of all Toronto residents – every single resident in every community – is my number one priority. Maintaining the trust of all of our communities is extremely important to the ongoing success of the Toronto Police Service.”

And Ramer apologised and stated: “We understand, however, that saying ‘sorry’ only means something if it is followed by demonstrated and sustained action, and a commitment to the marginalised and vulnerable communities most impacted by the issues outlined in this report. We vow to listen to you, and to act.”

In her report, Epstein was hopeful that that there was a “genuine commitment” to build a “new relationship between the service and marginalised and vulnerable communities.”

As an institution the police do not seem capable of caring about vulnerable people. And they are now making their disdain clear for reforms that would make them more accountable.

The violence used to forcibly evict homeless park users over the past few weeks not only suggests otherwise, but amounts to a profound betrayal of public trust.

The vow of the mayor and police chief to “listen” and “act” in the interests of marginalised people now read as a cynical public relations ploy.

How many “missing persons” did the police create when residents fled the police violence and destruction of their shelters? As an institution the police do not seem capable of caring about vulnerable people. And they are now making their disdain clear for reforms that would make them more accountable.

If the police can so casually ignore a central recommendation resulting from how they failed marginalised people who were targeted by a serial killer, how can we now possibly expect any type of calls for democratic reform to be treated seriously?

Joe Hermer is an Associate Professor at the University of Toronto, and Chair of the Sociology Department at the University of Toronto Scarborough. He works in the area of law and criminology with a particular focus on the policing and regulation of vulnerable populations. He is currently the lead investigator of the Policing and Homelessness Initiative. One of the main projects of this initiative is the mapping of anti-homeless offences located in municipal by-laws across Canada.

Picture: One of homeless tents in Toronto’s Trinity Bellwods Park in October last year; the site was cleared by police in June (© Elena Berd / Shutterstock.com)