Policing InsightFeaturesAnalysisWhen remains are found in a suitcase, forensics can learn a lot from the insects trapped within

When remains are found in a suitcase, forensics can learn a lot from the insects trapped within 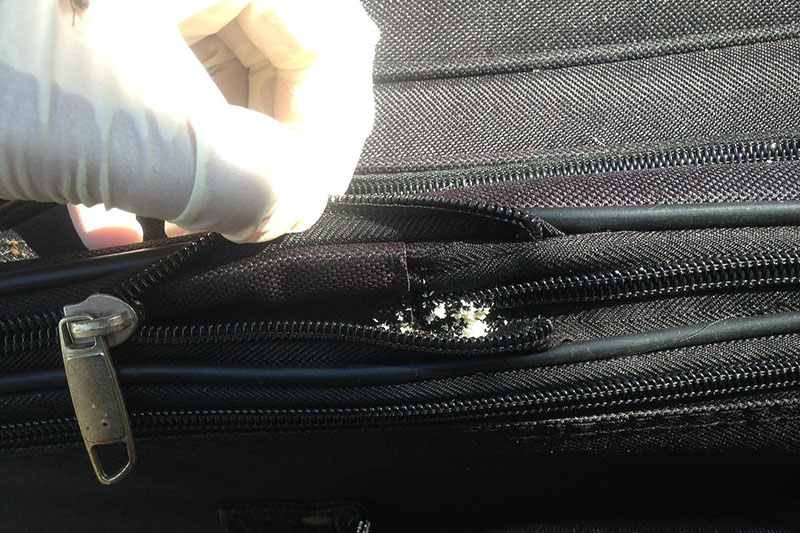 When human remains were found in two suitcases bought in a storage auction in New Zealand it made headline news around the world, but dead bodies are discovered in bags and suitcases with surprising regularity; Dr Paola Magni, Senior Lecturer in Forensic Science at Murdoch University, explains the key role insects can play in determining the details of such deaths, and outlines a ground-breaking experiment underway in Western Australia which will help to solve such crimes.

A crime scene can present itself in any form and size.

Sadly, this is not a unique case – bodies of murder victims are found in suitcases with astonishing regularity.

In recent weeks, an Aotearoa New Zealand family who’d purchased abandoned goods from a storage locker made the harrowing discovery of two sets of human remains hidden inside two suitcases.

Sadly, this is not a unique case – bodies of murder victims are found in suitcases with astonishing regularity. But they present a particular challenge for police investigating the crime, which is where forensic science comes in.

Forensic case history and crime news are sadly full of bodies found in suitcases, bags, wheelie bins, car trunks, fridges and freezers. Examples of such finds include a suitcase in a busy Tokyo train station in 2015, a suitcase on a Seattle beach in 2020, and the 2019 case of human remains in a suitcase left on the side of a South Australian highway.

There’s a simple reason why suitcases are so common in these situations. While most crime movies depict bodies abandoned above ground or buried in clandestine shallow graves, in reality murder victims are more often concealed in items arranged at the last minute.

Forensic researchers call such places ‘limited access environments’, because they limit, delay or totally impede one of the natural steps that happen after death: the arrival of hordes of insects.

These are things that are easy to obtain, accessible, large enough to fit a body, and easy to transport (preferably with wheels). They may also hide the smell of decomposition for a time – useful for the criminal to find an alibi or disappear.

Forensic researchers call such places ‘limited access environments’, because they limit, delay or totally impede one of the natural steps that happen after death: the arrival of hordes of insects.

The job of scientists like forensic entomologists is to assist crime investigation, but also to develop research that makes this task less difficult.

In a criminal investigation involving a decomposing body, forensic entomologists can use insects to help estimate the time since death, retrace the movements of criminals and victims, and identify the presence of drugs and foreign DNA.

Carrion insects – such as blue and green bottle blowflies, flesh flies, house flies and coffin flies – have highly specialised olfactory systems they use to detect the smell of decomposition.

If a cadaver is left undisturbed on the ground in a temperate environment, carrion insects will soon colonise it, attracted by the smells produced by the bacteria-mediated decay process. Within a few hours, the insects will lay eggs on the body’s orifices and wounds, and the tiny larvae hatched from them will start consuming the body.

But a suitcase physically limits access for the insects. And so far, forensic research on how insect involvement changes in such limited access environments has received little attention.

To date, only two pilot studies on decomposition process in suitcases have been completed, one in the United Kingdom and another by our team in Western Australia. Both studies show carrion insects are extremely resourceful when it comes to getting access to concealed bodies.

Suitcases in the bush

Hidden in a patch of bushland in Western Australia, we are currently running the largest-ever experiment on decomposition process in suitcases and wheelie bins, with almost 70 samples. 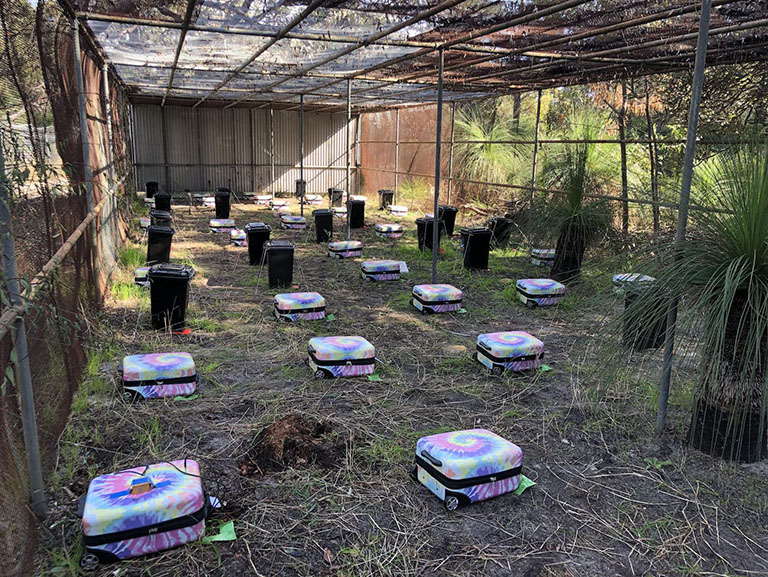 Suitcases and wheelie bins with stillborn piglets are being used in the largest limited access environment study to date (©Paola Magni, author provided).

This first-of-its-kind work will provide useful data to investigate similar cases around the world. Each suitcase and wheelie bin contains a stillborn piglet, simulating a dead body; controls are placed in the environment for comparison. We have placed instruments for recording temperature, humidity and amount of rain both in the field and inside the containers.

The experiment started in early winter 2022 and will end in the summer; the first data will be presented in the world’s largest forensic science conference in February 2023.

Despite an initial delay in insect access during the cold and rainy WA winter, within a month of placing the suitcases we have observed egg clusters of blowflies on and around the suitcase zippers. 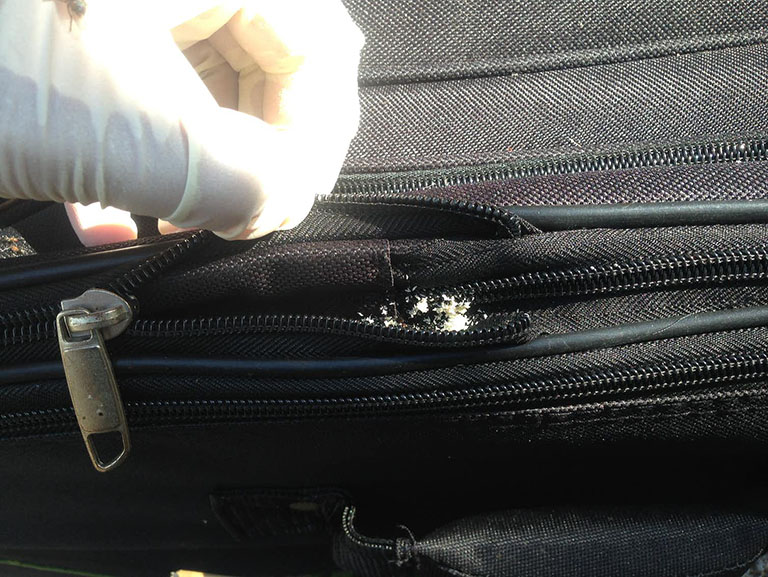 Insects will lay eggs on the surface of limited access environments, so their offspring can reach the contents within (©Paola Magni, author provided).

As we opened the suitcases at set intervals, we found the larvae of blowflies, along with coffin flies and some beetles active in the remains.

From this, a forensic entomology expert can infer the time or season of death, possible relocation of the body, and assist in the interpretation of the causes and circumstances of death.

This means the offspring of large flies and beetles must reach the body through the teeth of the zipper. Meanwhile, smaller flies can cross through the zipper as adults, and lay their eggs directly on the decomposing remains.

Once larvae complete their life cycle and emerge as adult flies, none of them can escape the suitcase. These trapped insects represent a rich source of information, as we know the habits and growth rates of various species, and can find toxicology data preserved in their exoskeletons.

From this, a forensic entomology expert can infer the time or season of death, possible relocation of the body, and assist in the interpretation of the causes and circumstances of death.

The investigation of human remains in a suitcase can often represent a Pandora’s box, full of complicated problems. But with the help of a humble carrion-eating fly trapped within, we gain a treasure trove of vital information that can help us solve crimes.

This article first appeared on The Conversation website, and is republished under a Creative Commons Licence; you can read the original here.

Paola Magni is a Senior Lecturer in Forensic Science at Murdoch University in Perth, Western Australia. A forensic biologist with a key focus on the application of natural sciences (entomology, taphonomy and aquatic biology) to crime scene investigation, she has several years of experience as a researcher and lecturer/instructor in forensic science. A practitioner recognised by the Italian Courts and the international scientific community, since moving to Australia Paola has been involved in forensic cases and research in WA and Tasmania, and has appeared in court as an expert forensic witness for investigations on cases of homicide, suspicious death, animal cruelty/wildlife, food forensic and stored products security. 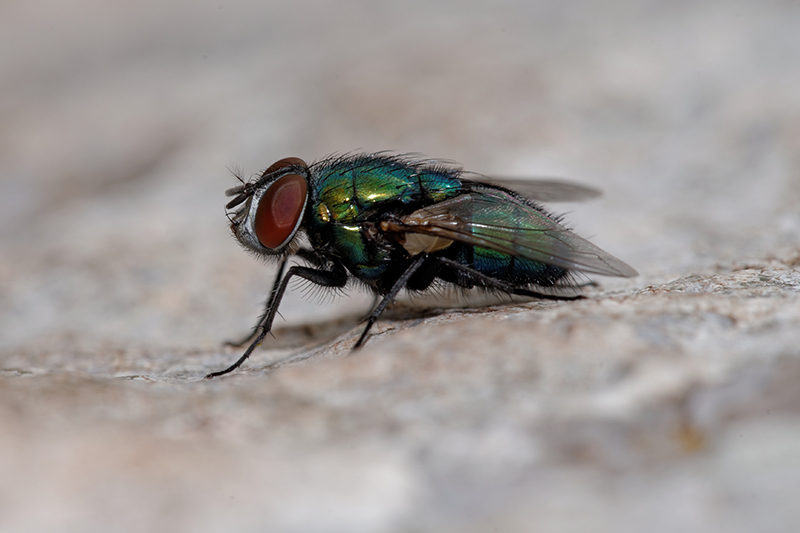 Flies, maggots and methamphetamine: Insects can reveal drugs and poisons at crime scenes
Examples of forensic entomology – the use of insects in criminal investigations – can be traced back to the 13th century, and today flies and other insects can help to identify everything from a murder victim’s use of ketamine or cocaine, to the chemicals used in pet poisonings, as Forensic Biologist Paola Magni of Murdoch University explains.