Policing InsightFeaturesAnalysis‘Narco-drones’ are the newest form of drug trafficking: Our laws aren’t yet ready to combat them

‘Narco-drones’ are the newest form of drug trafficking: Our laws aren’t yet ready to combat them 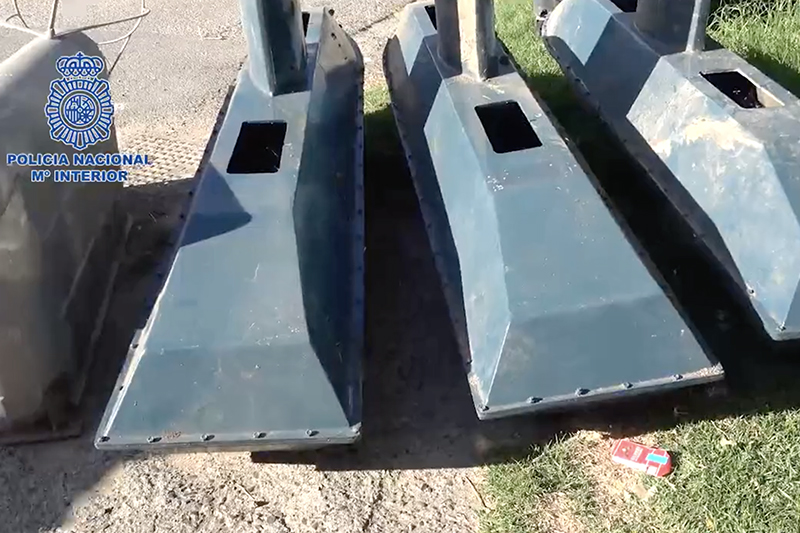 The recent Spanish seizure of a number of underwater ‘narco drones’ capable of carrying around 200kgs of drug while being operated remotely has highlighted the growth in one narcotics trafficking method; Professor Natalie Klein of UNSW Sydney and Dr Rob McLaughlin of the Australian National University believe both Australian and international law will need to be updated to be able to act effectively against those using such techniques.

These are ships or underwater vehicles that are remotely controlled or autonomous and don’t have humans on board. Both international and Australian laws need to catch up.

These remote-controlled ‘narco-drones’, ‘narco-subs’ or ‘underwater drones’ herald a new era in international drug trafficking. Drugs and other illicit goods can now be transported across the oceans, controlled by a remote operator located anywhere in the world.

Drugs are clandestinely shipped to Australia with traffickers attempting a variety of methods. It’s only a matter of time before the Australian Border Force is confronted with these ‘maritime autonomous vehicles’ being used to smuggle contraband into the country.

These are ships or underwater vehicles that are remotely controlled or autonomous and don’t have humans on board. Both international and Australian laws need to catch up.

There isn’t one universal definition of a ‘ship’ or ‘vessel’. This makes it difficult to know when rights and duties attach to that ship.

China, for example, has a shark-shaped drone used to gather intelligence. While a naval surveillance ship may be entitled to the freedom of navigation, it shouldn’t be presumed that such a small, uncrewed ‘vehicle’ also enjoys this right.

Private companies are designing uncrewed surface vehicles for use patrolling against illegal fishing.

The new technology will likely become a critical component for countries wanting better information about who’s doing what and where.

However, if there’s no-one onboard a remote-controlled submarine, the existing rules and procedures for law enforcement cannot work as they have before.

The 1988 Drugs Convention goes further, allowing parties to the treaty to stop and board each other’s vessels when they’re reasonably suspected of trafficking in illicit drugs.

However, if there’s no-one onboard a remote-controlled submarine, the existing rules and procedures for law enforcement cannot work as they have before.

The International Maritime Organization is undertaking a study of who is a ‘master’ and ‘seafarer’ in the context of uncrewed surface ships used to transport cargo around the world.

While the organisation has an important focus on maritime safety, there are many legal questions relating to crimes at sea that also need to be answered.

Determining who might be held criminally responsible when an uncrewed vessel is seized isn’t immediately apparent.

Australian legislation criminalises drug-trafficking when a “person transports the substance” but doesn’t refer to a situation where the person isn’t present at the time of transport. A person isn’t necessarily in “possession” of illicit drugs if they’re remotely controlling a narco-drone.

The alternative may be to prosecute an alleged offender on the grounds they’ve aided and abetted in the crime.

This also raises the question of whether, and how, the designer of an autonomous vehicle may be criminally responsible. For example, what if the person designing the autonomous vehicle didn’t know it was to be used for criminal purposes?

We may need to rethink how we understand criminal recklessness or intention as requirements of a drug-trafficking offence when remote-controlled trafficking occurs.

Designers and manufacturers of maritime autonomous vehicles may need to consider how to safeguard their products against improper use.

What if the alleged offender is a Russian national located in Belarus who’s operating the autonomous vehicle to transport drugs from Myanmar to Australia?

Determining which country has legal jurisdiction when a criminal enterprise uses autonomous narco-subs may be a complex issue.

For example, what if the alleged offender is a Russian national located in Belarus who’s operating the autonomous vehicle to transport drugs from Myanmar to Australia?

Australia doesn’t usually criminalise conduct by foreigners that occurs in the sovereign territory of other countries (the offence of killing an Australian overseas being one exception).

In light of uncrewed vessels, states may need to consider new bases of jurisdiction to justify the exercise of authority over an alleged offender.

Even if law enforcement officials manage to arrest the perpetrator and assert jurisdiction, prosecution will likely depend upon a range of other challenges such as criminal intelligence sharing and extradition processes.

VIDEO: The Colombian Navy has seized a narco submarine transporting several packages of cocaine. The vessel belonging to an armed group of dissident FARC guerillas was discovered in the Pacific Ocean on its way to the coast of Mexico pic.twitter.com/DnCwrSSDEL

Prior to the recent seizure in Spain of the ‘narco-drones’, Houthi rebels in the waters around Yemen were using small remote-controlled vehicles laden with explosives to attack Saudi ships.

This terrorist act potentially falls within the terms of the 2005 Convention for the Suppression of Unlawful Acts against the Safety of Maritime Navigation. States party to this treaty are to criminalise these sorts of actions and prosecute or extradite those responsible.

But as with drug-trafficking laws, questions arise as to how terrorism laws will apply to the use of these autonomous vessels.

Broader consideration of Australian policing powers is further needed to determine if our laws are fit for purpose in assessing this new security threat.

It’s not entirely clear, for example, that the ‘seafarer’ definition in the Navigation Act could currently cover maritime autonomous vehicle operators. This is because it states: “Seafarer means any person who is employed or engaged or works in any capacity (including that of master) on board a vessel on the business of the vessel…”

The simplest response to this new criminal enterprise might be destroying any narco-drones captured at sea. International law doesn’t prohibit such a response, although environmental considerations would likely arise.

In Australia, the Maritime Powers Act permits the disposal of vessels at sea only in certain circumstances. But the simple interception and destruction of a narco-drone – with no intention to seize and investigate, or to collect evidence – is likely to require updates to the law.

Dr Natalie Klein is a Professor at UNSW Sydney’s Faculty of Law, Australia. She was previously at Macquarie University where she served as Dean of Macquarie Law School between 2011 and 2017, and Acting Head of the Department for Policing, Intelligence and Counter-Terrorism at Macquarie in 2013-2014. Professor Klein teaches and researches in different areas of international law, with a focus on law of the sea and international dispute settlement. She provides advice, undertakes consultancies and interacts with the media on law of the sea issues.

Dr Rob McLaughlin researches, publishes, and teaches in the areas of Law of Armed Conflict, Law of the Sea, Maritime Security Law and Maritime Law Enforcement, and Military Law. He came to ANU College of Law after a career in the Royal Australian Navy as a Seaman officer and a Legal officer; consequently, his research interests are primarily focused around issues of practical operational significance. He routinely engages in research activities, and course development and delivery, with the ICRC, the Australian Red Cross, the International Institute for Humanitarian Law, and the UN Office on Drugs and Crime.