More than an add-on: Increasing online engagement is a more effective way to manage police demand

Following the publication of CoPaCC's recent thematic on police contact management, Hootsuite's UK Police Lead Nathan Bird examines some of the findings and highlights the increasing role of online engagement, a low cost and, at times, more effective way to manage police demand.

The recent CoPaCC report into Police Contact Management landed at a time when many people in policing were probably focusing on different things. That’s a shame, because the report gives many really interesting insights into the growing pressure on call centres. A 15% rise in emergency 999 calls is a striking figure and – as Policing Insight’s own Ian Wiggett points out – even if call management is the ‘Cinderella’ to policing, it is nevertheless crucial to public confidence. The picture has its regional variations, with residents of Lancashire and Bedfordshire twice as likely to pick up the phone to the police than people in North Yorkshire but everywhere it’s happening more often.

Of all the things in the report that surprised me – as an outsider to policing – probably the most shocking was the small proportion of demand that is managed online.

It’s not surprising that the increase in pressure has had its impact on performance. In several areas, over half of non-emergency calls were either answered late or not at all. That’s particularly worrying as in some areas a surprisingly high proportion of these calls do turn out to be emergencies. Of all the things in the report that surprised me – as an outsider to policing – probably the most shocking was the small proportion of demand that is managed online. The report gives some encouragement about online crime reporting, especially in the Metropolitan Police and West Yorkshire, but otherwise has virtually nothing to say about the many digital choices that today’s citizen has for contacting the police. This is a surprising omission when you consider the achievements of the Single Online Home (which now covers 60% of the population and is estimated to have taken over 10% of police demand online and managed it there).

Yet other government organisations have moved further and faster to shift demand online and onto social media. They do it for two main reasons. The first is that research shows that this is what the modern citizen wants from public services. Quick, automated, readily available, efficient services to meet demand are the norm in the private sector and there’s no shortage of evidence that the public would like to see the same in policing. The lessons from other sectors are that this produces improvements, not reductions, in quality – for example Highways England came to Hootsuite for help and soon saw a 27% rise in Twitter engagement and the British Museum saw a 126% rise in engagement when it embraced this fresh approach.

Police understanding of the power of social received a huge boost as part of the Digital Policing Portfolio.

The second reason to accelerate the move online is cost. All these calls into traditional call centres cost a huge amount of money to process – especially if they lead to the creation of an incident and particularly if that incident involves police attendance. There is abundant evidence that voice calls are many times more expensive than interactions via, for example, social media. Some calls absolutely need to be handled via voice – but not all. For a police service that has had an exceptionally difficult few years from a resourcing perspective, there are surely compelling reasons to grab any opportunity to do something that the public want when it costs less to do so. Other sectors have seen dramatic results in this approach which enabled Hong Kong Airlines to respond to customer contact six times more quickly and they’re not alone: we work with 80% of America’s fortune 1000 companies to help them secure the benefits of social.

The role of social media in service delivery is something that has refused to go away since the early days a decade ago when it was dismissed as a fad. The explosion in the number of police users – and citizens relying on the police for information on social media channels – is evidence of that durability. Police understanding of the power of social received a huge boost as part of the Digital Policing Portfolio. The team that delivered the social media programme looked deeply into police practice and produced evidence of really effective professional use of the media – as well as some bad habits. That learning has now been shared across the police service. The potential of social to be a much more mainstream component of police/community engagement has been recognised by the formal requirement for it to be dealt with as an official contact channel: meaning that a tweet to the police will soon need to be recorded just as properly as a letter or a 999 call.

Today the Metropolitan Police Service has over 1.2 million followers – and social media has helped the Police Service of Northern Ireland to become the largest news outlet in the province.

As social media has moved from being seen as an ‘add-on’ to a mainstream communication and engagement tool in its own right, its use has increased dramatically. Today the Metropolitan Police Service has over 1.2 million followers – and social media has helped the Police Service of Northern Ireland to become the largest news outlet in the province. With 7.1 million weekly interactions just on the 43 (top-level) Facebook pages there is already an incredible amount of interactive engagement between the police and public. Whilst only a tiny proportion results in ‘traditional’ police demand, the engagement demand is huge and critical to the credibility of policing and supporting the traditional Peelian principles of policing by consent. In the light of this growth, it comes as no surprise that as the coronavirus emergency has spread, the use of social as an enterprise-wide strategic tool has soared – by over 30% in the case of Hootsuite.

The coronavirus emergency undoubtedly overshadowed the launch of Policing Insight’s thematic. It has also accelerated many companies’ digital transformations: changes that have been long overdue have suddenly been made because there was no alternative. It may well be that by the time the next thematic takes place, something significant will have happened to public contact with policing. An alternative to the current massive dependence on telephone traffic gives an opportunity to give the public a service that they want, at less cost than what they get today. It’s surely too good an opportunity to miss. 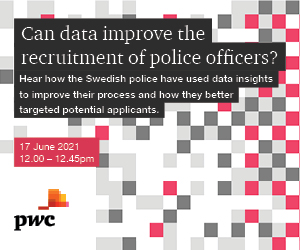