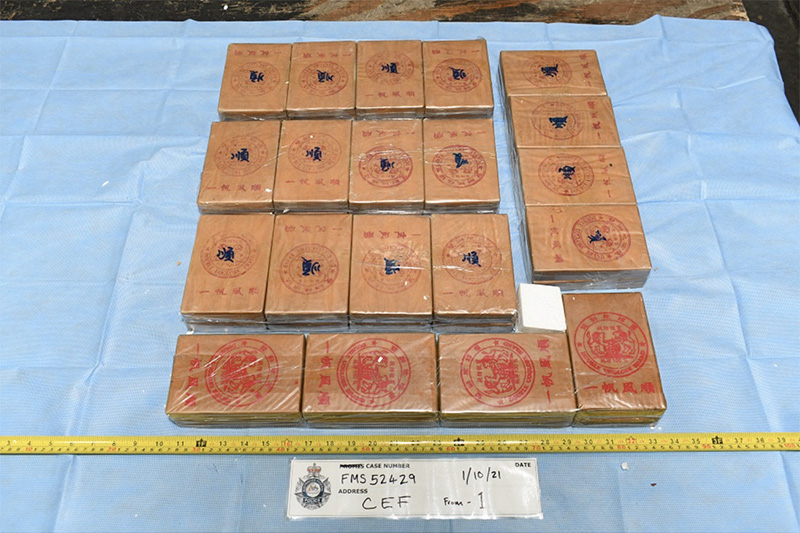 Last month the Australian Border Force and Australian Federal Police seized 450kgs of heroin from a shipping container in Melbourne; but the huge seizure should be seen as a sign that the approach focused on policing and criminal justice is not working, as well as an indication of the scale of the challenge facing the country’s fight against narcotics, explains Australian Strategic Policy Institute (ASPI) analyst Dr Teagan Westendorf.

That number sounds huge, but it does not convey the true gravity of the challenge faced by police and the criminal justice and health systems.

Last month a whopping 450 kilograms of heroin being imported by ship was seized in Melbourne. That number sounds huge, but it does not convey the true gravity of the challenge faced by police and the criminal justice and health systems.

The impact is conveyed in new data from the Australian Criminal Intelligence Commission (ACIC) on the amount of heroin used by Australians in 2020, new annual data from the Penington Institute on the number of accidental overdoses by heroin users, updated ACIC data on the year-on-year tracking of heroin seized at Australian borders, and the United Nations Office on Drugs and Crime (UNODC) 2021 world drug report.

This combined data provides critical insights for the public, government and policing agencies about the importation and use of narcotics as Australia recovers from the COVID-19 pandemic, supply chains are restored and the nation seeks policy responses to combat this security and health issue.

Trafficking has bounced back

Let’s unpack them. First, 450 kilograms of heroin is a huge amount, even if it were a year’s total of border seizures, let alone just one. 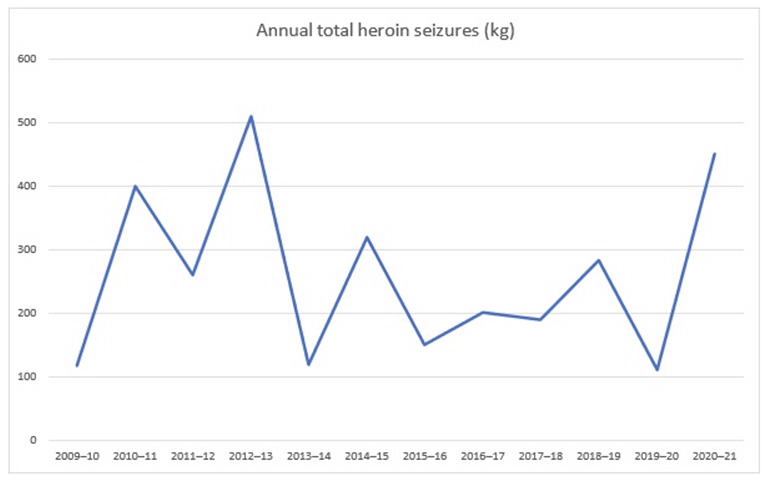 Over the past decade, the annual total seized at Australian borders has fluctuated a lot according to ACIC data, but only twice has it topped 400 kilograms in a year. The previous maximum was just over 500 kilograms in the 2012-13 financial year.

This single seizure will make the 2021-22 financial year the second highest total, even if nothing else is seized in the next eight months, which is unlikely. Last year’s haul was the lowest in a decade, likely due to COVID-19-related interruptions to international supply chains through which wholesale drug imports are trafficked.

This means trafficking has already bounced back from COVID-19 to the tune of a 265% increase from last year’s annual total. Even if we look back to the 2018-19 financial year, being the last total not affected by disrupted global supply chains, this seizure alone is a 160% increase from 2018-19 total.

Let’s compare data on annual consumption of heroin in Australia over the past four years to see if increased seizures translate to lower usage because there’s less product on the street. 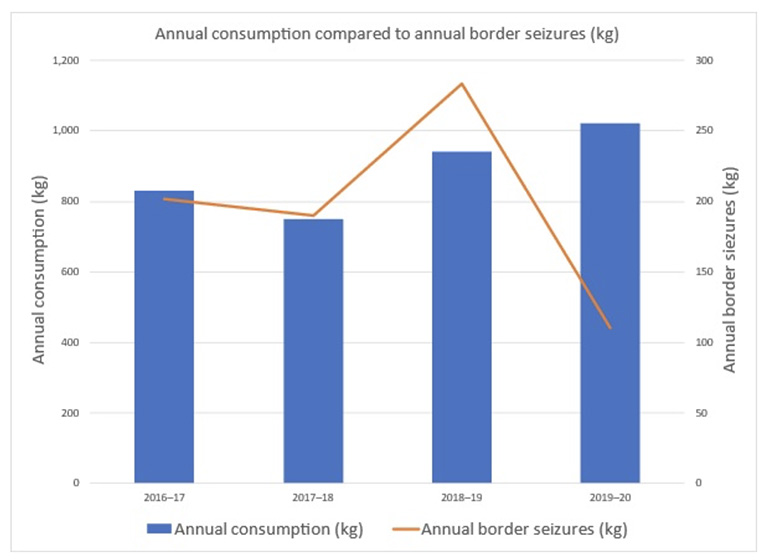 This shows that intercepting less of the smuggled narcotics does not necessarily translate to more drugs being consumed. In 2018-19 more heroin was seized and more was also consumed, and in 2019-20 significantly less was seized and only slightly more was consumed.

So, while border seizures are important in combatting the use and effects of heroin, there is no direct causal relationship between the amount seized by police and the quantity used.

That is likely to be because, even with large seizures, so much product makes it through the borders that the amount used is dictated mostly by demand, and price fluctuations even out any supply and demand issues.

The general upward trend of use and consistently significant seizures suggests that the ‘pie’ of annual imports is getting bigger, and police are seizing a relatively even percentage of it.

This means police are keeping pace with increasing imports, but that the balance of quantities of imports, seizures and use is remaining stable enough for high profit margins to insulate high-level traffickers’ investments.

Let’s now compare that to the last decade of data on annual unintentional overdoses on heroin in Australia. 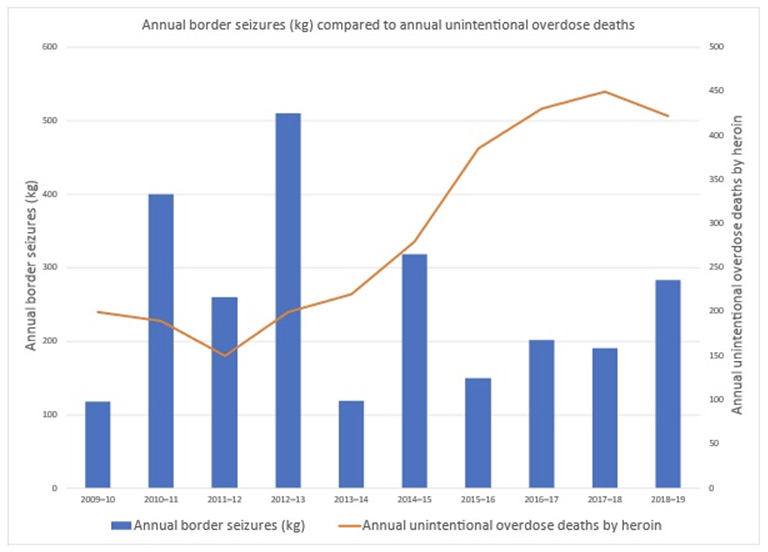 The steady and significant increase in unintentional deaths – about 200% over the decade – suggests that the volume of drugs seized by police does not translate into less available product than there is demand for in the Australian market.

The fact that there were only 67 unintentional drug deaths reported in 2006 means such deaths increased by 500% up to 2019. Border seizures do not reduce use and they don’t correlate to reduced deaths. So, what big insights stand out?

It’s clear that no matter how well police do their job, the problem of heroin importation, addiction and deaths cannot be solved simply by border seizures. There’s too much product coming in and profit margins are so high that traffickers can clearly afford to lose large quantities and still make sufficient money to keep operating, and even increase imports year on year. If we add annual consumption to annual seizures we see a steady increase in the overall quantity of heroin being imported.

This means that Australian governments will be fighting a losing battle against drug traffickers until a public-health approach is developed to address heroin addiction and related crimes. This requires policies that understand heroin addiction is an illness that compromises an individual’s capacity for agency, rather than a conscious decision people make to live a criminal life, and the implementation of services and pathways to support recovery.

These datasets show that the demand for illicit opioids is steadily increasing and new, synthetic versions are an imminent problem. The ACIC data also shows fentanyl is creeping into the Australian market, with use patterns suggesting it could be being imported on the east coast, mainly to Sydney and Hobart, and only just starting to crop up in other capital cities.

Synthetic opioids are clearly on the way into Australia and logic suggests this country will have been identified by transnational organised crime groups as a new market for them.

The UNODC report details how the illicit use and market for synthetic opioids like fentanyl have overlapped with heroin and in some places entirely replaced it: the US is experiencing a dual epidemic; and Estonia and Finland are now completely synthetic markets.

Sources of manufacture of synthetic opioids are much less limited than sources of heroin. Synthetics are also not limited by seasonal growth of raw opium, so the potential for production is likely greater than heroin.

Fentanyl and other similar synthetic opioids are stronger than heroin and can result in overdoses quicker and at much lower doses, making their use more volatile. They feature in the majority of overdose deaths in the US.

Synthetic opioids are clearly on the way into Australia and logic suggests this country will have been identified by transnational organised crime groups as a new market for them.

With a fierce and growing demand for opioids in Australia, governments cannot afford to waste more time on an approach focused on policing and criminal justice. It’s not working, no matter how successful police are at seizing ever greater quantities at the border, and things are most definitely getting worse.

Dr Teagan Westendorf is an analyst in the Northern Australia Strategic Policy Centre and the strategic policing and law enforcement program at ASPI; this article first appeared on ASPI’s The Strategist website.